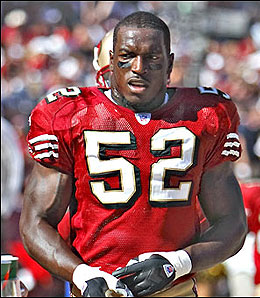 Patrick Willis’ ability to tackle anything was one of the few bright spots on a 49ers’ team that took a big step backward in 2007.

Well, umm, Patrick Willis tackled everything. Without looking at the ‘Niners’ defensive stats, we are pretty sure Willis was the only player in red and gold that notched a tackle. And that’s not so much a shot at the players around him, but an acknowledgment of just how dominant Willis was in 2007. Also, Andy Lee punted the hell out of the football. Although, that’s somewhat understandable considering how much more practice he had booting the pigskin than any other NFL punter.

Frank Gore, Alex Smith and Darrell Jackson stunk up the joint. Considering all three of those players were expected to play a significant role in the team’s success, this was a massive failure for most experts’ chic pick in 2007 to make noise. The ‘Niners finished last in total offense, points scored and passing yards. Well, at least the rush game was not dead last. San Francisco mustered the 27th best rushing attack in the league. It did not help matters that four different quarterbacks took snaps due thanks to injury issues. The 49ers’ defense showed signs of hope, but the offense was an albatross that brought the team to its knees.

After an amazingly disappointing season, the ‘Niners must especially address needs on the offensive side of the football in the draft. Thanks to the Pats’ deal, the ‘Niners do not have a pick in the top 10. Instead, they have the 29th pick courtesy of Indianapolis. San Francisco has been active in free agency with the signing of defensive end Justin Smith from Cincinnati. However, getting help is essential for the team’s offensive line, which will be without future Hall of Famer Larry Allen. Also, establishing a competent quarterback situation is of the utmost importance. Smith’s injury added to the offensive problems, but he did not flash any signs of life in 2007 when healthy.

San Francisco has taken a bit of ridicule for giving the Patriots a top 10 pick in the upcoming draft, but I’m pretty sure the 49ers are perfectly content with Joe Staley. So late April won’t hold a lot of intrigue to 49ers’ fans, as the team picks 29th. NFL Draft Countdown has them going with a defensive pick, but we are convinced that the best pass catcher (tight end or wide out) will be Mike Martz’s biggest request.

Quarterbacks – This might be Smith’s last shot with San Francisco. If he doesn’t make some kind of progress, the team will be looking to draft the next potential franchise quarterback one year from now. To put this into layman’s terms, Smith has a career passer rating of 63.5. If he can’t raise that significantly, we think he’s done.

Running Backs – I have long stated that with the NFL’s 16-game schedule, running back statistics have become overrated. Today, 1,200 yards is the new 1,000 yards. Getting to 1,100 yards just isn’t as impressive as it used to be. Yes, we’re also still talking to you Thomas Jones. Gore, a player we have a severe man-crush for, wasn’t much more valuable, as he clawed for just over 1,100 yards and six measly scores. The good news was that Gore raised his yards per carry average to over 4.0 in each of the last six contests. It’s too early to talk about rankings, but Gore might just return to the sleeper group he owned a couple years ago.

Wide Receivers – Ladies and gentleman, always beware of divisional trades. If the Seahawks, the NFC West’s top team for much of the decade, thought the ‘Niners were a potential threat, do you honestly think they’d trade their “number one” receiver Darrell Jackson to them so easily? With trades among division foes, if it looks like a fish and smells like a fish, it’s probably a lemon (mmm, lemon chile tilapia). That’s exactly what the ‘Niners got in Jackson. He only amassed 497 yards receiving and finished fourth on the team in receptions with 46 catches. He’ll be back again in ’08 and he doesn’t have much help. They need to draft a receiver or two or three in this year’s draft.

Tight Ends – It’s almost impossible to tell if Vernon Davis’ struggles have more to do with his own woes or the overall lack of a passing game, but if Smith is in the spotlight, then Davis is in the headlights. We think that means he also must take advantage of his natural athletic gifts. It sounded really good in our heads at least.

Defense/Special Teams – The ‘Niners signed Justin Smith to help give a bland defensive line some pop. That may not do the trick though. Willis is a monster, with nearly 200 tackles in his first season. CB Nate Clements picked off four passes in his first season with the ‘Niners. The defensive rebuilding continues, but the special teams could use some spicing up.

With the 49ers’ offensive line seeming to come around, the hopes for Gore remain high for us. As of now, we still have him in our top 10. Other than that, you shouldn’t care about the ‘Niners unless you are in an IDP league.

By Andy Goldstein
This entry was posted on Friday, March 14th, 2008 at 5:15 pm and is filed under Andy Goldstein, Derek Jones, FOOTBALL, Team report. You can follow any responses to this entry through the RSS 2.0 feed. You can skip to the end and leave a response. Pinging is currently not allowed.