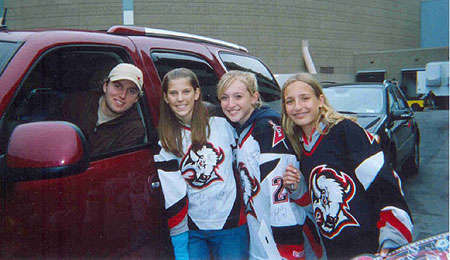 Let’s hope, in what is their third appearance on the site, that the Sabres’ skanks in training can help Thomas Vanek heat up.

The playoffs are within reach for so many teams. We love to complain about parity, but it sure does make the NHLers play hard, eh? This time of year, it’s all about injuries, hot streaks and cold streaks. There’s really nothing else that matters.

By Steven Ovadia
This entry was posted on Friday, March 14th, 2008 at 12:53 pm and is filed under HOCKEY, Ice Chips, Steven Ovadia. You can follow any responses to this entry through the RSS 2.0 feed. You can skip to the end and leave a response. Pinging is currently not allowed.