Blazing Bobcats Getting Crash Back 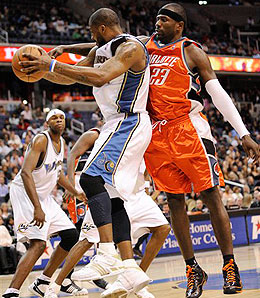 The Charlotte Bobcats, riding a franchise-record five-game winning streak, are expected to get their best player back tonight when Gerald Wallace returns from an eight-game absence thanks to a concussion.

While he’s been out, the ‘Cats really turned things around, winning every game this month after struggling through a 1-11 February.

The team spent some big bucks this summer but, so far, the moves haven’t paid off. After a strong finish last season that allowed the Bobcats to reach 33 wins, and a good start this year (6-4), it’s been pretty well downhill since until this recent streak.

Jason Richardson, a big trade acquisition on draft night last year, has been a huge part of this roll, averaging 28.8 PPG and 6.6 RPG during the winning streak. His 42-point explosion against his ex-team, Golden State, was the highlight of a week in week J-Rich walked away with Eastern Conference Player of the Week honours. Richardson has been given a big role in the Charlotte offense, and he’s been given free reign to go absolutely crazy from the perimeter, and both moves have paid off handsomely as he’s enjoyed a fine comeback season.

Matt Carroll, re-signed by the team this offseason, has suddenly become a valuable commodity again with Wallace out. Moved into the starting lineup, he’s been lighting it up of late, especially from downtown, and has proved to be among the most popular waiver wire pickups in recent days. Carroll’s overall value has diminished greatly after last year’s breakout, but he looks like he’s going to finish strong, although probably not at this current level.

Rookie Jared Dudley has also put himself on the map since Wallace has been out, scoring in double digits in four straight games before getting shut out on Saturday. Given starter-type minutes, Dudley has responded with some decent scoring, some solid rebounding and good steal totals. Unfortunately, with Wallace expected to play plenty of small forward as the team tries to keep him away from the more physically demanding minutes of the four spot, it will have a direct impact on Dudley’s PT and value. So it looks like the rook’s run is over for the time being. (With Wallace moving to SF, J-Rich will go back to SG, sending Carroll back to the bench.)

Raymond Felton, a disappointment for a good chunk of the season, is really coming around of late. Given extra responsibility with Wallace out, the former Tar Heel has responded in a big way, averaging 18 PPG with 9.4 APG in March. He’s even showing a better touch from outside, an area of his game that has continually diminished since his rookie year. While Felton’s rebounding is also down, we’ve seen enough progress from him this year to think he can still develop into a solid fantasy point guard. Staying healthy has definitely helped.

In the midst of a six-game road trip, the first of which is in the books, now the ‘Cats have to find a way to integrate Wallace back into the mix without upsetting the vastly improved play of Richardson, Carroll and Dudley. Obviously, PT is going to be a big factor here, but Crash isn’t expected to immediately go back to playing 40 minutes per night.

This team’s other challenge will be to keep this roll going. Currently 12th in the East, Charlotte is just two games out of the final playoff spot, and with Indiana, Chicago, New Jersey and Atlanta all struggling, it wouldn’t take much of a hot streak to take control of the eighth spot in the East.

However, the schedule is about to get very tough. The next three games on this road trip are stops in Dallas, playing better of late, and basically unbeatable at home; Houston, unbeatable anywhere with 19 straight wins; and Cleveland, among the top teams in the NBA since the New Year. A 6-22 road record for Charlotte doesn’t exactly lead to optimism, either.

It’s going to be a tough road to better last year’s club. If Charlotte can go 10-9 from here on out, it will finish with 34 wins, and the way things are going, that may be good enough to get in the playoffs, unless one of the four teams ahead of them suddenly gets hot.

Even if the Bobcats fail to overtake the pack and again miss the playoffs, we’ve seen something from this team recently, stepping up without Wallace the way they did. It’s been an impressive run, suggesting that this team is very, very close to being a playoff caliber club.

By RotoRob
This entry was posted on Wednesday, March 12th, 2008 at 2:11 pm and is filed under BASKETBALL, RotoRob, Team report. You can follow any responses to this entry through the RSS 2.0 feed. You can skip to the end and leave a response. Pinging is currently not allowed.