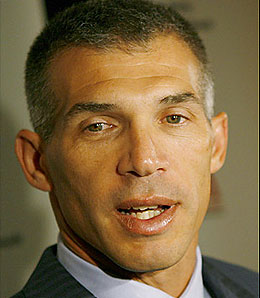 Joe Girardi says he’s not worried about Andy Pettitte’s elbow. Should you be? (AP)

It’s always a frustration for fantasy owners when trying to determine which Spring Training injuries mean something and which simply fall into the ‘I would have played if this game counted” category.

Consider the raft of injuries the New York Yankees are currently dealing with.

For starters, lefty Andy Pettitte was scratched from his start Wednesday after experiencing elbow discomfort following his last bullpen session. No biggie, right?

Well, that’s what everyone is saying. Manager Joe Girardi insists that Pettitte will take the hill again in five days and that this issue will in no way hurt the southpaw’s chances of being ready for the start of the season.

Okay, so that’s all cleared up. Just remember, Dandy Andy won’t have any HGH-induced advantages as he works to stay healthy this season.

Fortunately, Philip Hughes is looking fantastic and Chien-Ming Wang, who had been brutal so far, fared much better in his last start.

Left fielder Johnny Damon is also dealing with a minor woe, missing the past two games after fouling a ball of his toe on Monday and suffering a bruise. He might be back in action tomorrow. Damon’s been hitting very well this spring, batting .316.

Still in the outfield, Hideki Matsui has yet to actually see any action in the field as he works his way back from right knee surgery he underwent in November. He’s DHed three times this spring, but is expected to make his debut in left field “very soon,” according to Girardi. With just six at bats so far, I’d also like to see Matsui get his offense ready as well.

Shelley Duncan, who is vying for a bigger role with the team this year, was back in action this afternoon after fouling a ball off his shin Tuesday. If he had to miss some time, that would have been a tough break. He’s batting .421 and making a great case for expanded PT this season.

By RotoRob
This entry was posted on Wednesday, March 12th, 2008 at 7:27 pm and is filed under BASEBALL, Injuries, RotoRob. You can follow any responses to this entry through the RSS 2.0 feed. You can leave a response, or trackback from your own site.