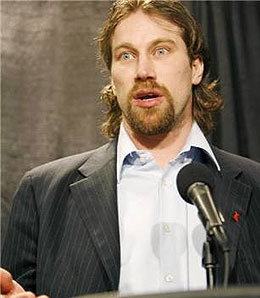 Peter Forsberg isn’t exactly easing back into the NHL.

It’s the week of big returns — Peter Forsberg, Sidney Crosby, the entire San Jose Sharks team. First, let’s start in Denver where Forsberg decided to ease back into things by averaging about 20 minutes a game. While Foppa hasn’t recorded any points in his two games, his speed and vision look to be in game-shape already (however, he sure was sucking wind during the interviews after his debut). The biggest fantasy benefactor to this? It should be Milan Hejduk, whose best years were with Forsberg at centre.

By the way, Forsberg’s timing couldn’t be better with Marek Svatos and Ryan Smyth out. Right now, that means that Paul Stastny is playing with Wojtek Wolski and Andrew Brunette.

As for Crosby, he exploded out of the gate against Tampa with scoring chance after scoring chance, but walked away with just one assist. Since the return of the Pittsburgh captain, the high-flying Penguins have been limited to two goals in each of their two games. With a big game against Alexander Ovechkin and the Washington Caps coming up on Sunday, look for Sid and his buddy Evgeni Malkin to be up in fine form.

Remember when the Sharks were the Stanley Cup contender who couldn’t score? We all know about Jonathan Cheechoo’s resurgence and the acquisition of Brian Campbell, but there’s another layer there for fantasy players to check out. Young Joe Pavelskihas been manning the power play point next to Campbell and has been picking up points as the Sharks started converting on their special teams. Also, Patrick Marleau’s recent return to form means that his linemate Devin Setoguchi has been picking up additional points.

Who is David Booth? For anyone looking for a sleeper pick down the stretch, check out this Florida left winger. Booth’s quietly picked up 20 goals so far in his sophomore season, with the majority of them coming since the new year.

Don’t blame Mike Smith for those Tampa Bay Lightning losses — it’s not like he’s getting a lot of defensive help out there. In fact, Smith hasn’t been getting much offensive support either. However, his acrobatic skills and Marty Turco-like ability to handle the puck mean that the rest of the season is Smith’s tryout to be the starting goalie in Tampa. If you’re looking for a cheap goalie pickup to get some starts, Smith will definitely get his opportunity. It’s up to his teammates to give him some support, though.

This just in: Anaheim’s Corey Perry will be out until the playoffs with a nasty leg laceration. That means that the Ducks, who’ve struggled to score goals lately, will be hoping that young Bobby Ryan can bring more to the table.

While this isn’t really fantasy related, I thought I’d throw it out there — what’s the over/under on the percentage of Leafs’ fans pissed off about their recent winning streak? After all, if you’re not going to make the playoffs, you might as well go for the draft lottery, right? Especially if you’re an aging, slow, expensive team that needs to rebuild. Oh well, Leafs Nation, at least you know that if they got that No. pick, they’d probably trade it away for an over-30 broken down power forward.

By Mike Chen
This entry was posted on Friday, March 7th, 2008 at 6:41 pm and is filed under HOCKEY, Ice Chips, Mike Chen. You can follow any responses to this entry through the RSS 2.0 feed. You can skip to the end and leave a response. Pinging is currently not allowed.