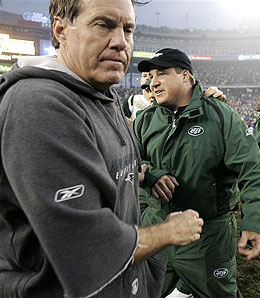 The Jets rose to the occasion in 2006 and surprisingly made it into the playoffs under first-year head coach Eric Mangini. In 2007, the bloom came off the rose — and then some — as the Jets went into freefall mode yet again, finishing the year 4-12. The offense ranked 26th in total yards and, defensively, the Jets were a sieve stopping the run (ranked 29th in rush defense). Amongst the East Rutherford pile of rubbish emerged receiver Jerricho Cotchery, who set a career high in receptions (82) and yards (1,130). Outside of Cotchery and at times electrifying Leon Washington, the Jets lacked playmakers in ’07.

Before the season started, we didn’t think much of Thomas Jones. In fact, we saved our most damning indictments for him. We called him boring. Repeatedly. Jones went out and reached a completely new level of dull. Yes, he broke 1,000 yards, but if a running back needs 300 carries to get to the 1,000-yard mark, it doesn’t really help any fantasy team. Anyone unlucky enough to start Jones probably found that out the hard way. As for the quarterbacks, we just have to say that Washington should probably have been the starting running back and quarterback. He completed all of his passes and averaged 36 yards per toss. That’s clutch!

The Jets realized that their running game wasn’t exactly efficient in 2007. So they went out and picked up guard Damien Woody and fullback Tony Richardson in free agency. We would have loved to see the Jets make a run at Michael Turner, who ended up going to Atlanta. Jones still bores us to tears, but if he enters next season as a starter, his yards per carry average could actually approach four. Woo hoo!

Armed with the sixth pick of the draft, the Jets have numerous needs, specifically on offense. After going defense last year in the first round with CB Darrelle Revis and going on a spending spree on defense, the Jets need to attack the offensive personnel. They must make a splash, and having Arkansas RB Darren McFadden fall into their laps at pick six would do the trick. Plus, McFadden would help draw some attention back to a franchise that clearly is the red-headed stepchild of New York football. After all, the Giants were a bit busy earlier this year.

Quarterbacks – Is there another team in the NFL with quarterback play as boring as the Manginis? Chad Pennington and Kellen Clements played revolving quarterback in ’07. Neither one wildly distinguished himself as the man last season. As the 2008 season looms, the Jets are in a peculiar situation. Pennington’s salary will grow to $8 million due to restructuring in previous years. How many $8 million backups exist in the NFL? If you said zero, you’re onto something. Unless the Jets have plans on releasing him in the near future, Pennington will probably be given plenty of chances to be the starter in ’08.

Running Backs – Despite the digs on Jones, the Jets have a running game to watch, mainly because of who else could get carries. Obviously, if McFadden falls to the Jets, we’d be thrilled. We also hold out hope that Washington becomes the primary offensive weapon for Mangini. He’s a big-play threat who attacks teams in both the running and receiving (and passing) games.

Wide Receivers – Remember last season when Laveranues Coles proclaimed that the Jets’ style of ball would lead to an early retirement for the veteran? Well, his play certainly indicated that he might be towards the end. Cotchery came on to give the receiving corps a boost by playing the best football of his young career. The team just released Justin McCareins and definitely needs more depth in the receiving area.

Tight Ends – Chris Baker played as well as anyone could have expected, as he chipped in with 409 yards. Unfortunately, his ceiling isn’t very high, so there’s no need to worry about the Jets when considering a tight end for your fantasy team.

Defense/Special Teams – Washington was the lead dog for the Jets’ special teams as an explosive return man, returning three kicks for scores in 2007. The Jets’ defense needs a few more difference makers including finding a way to pressure the quarterback. They only reached the signal caller 29 times a season ago, a total which ranked them 25th in the league.

By Andy Goldstein
This entry was posted on Saturday, March 8th, 2008 at 6:11 pm and is filed under Andy Goldstein, Derek Jones, FOOTBALL, Team report. You can follow any responses to this entry through the RSS 2.0 feed. You can leave a response, or trackback from your own site.