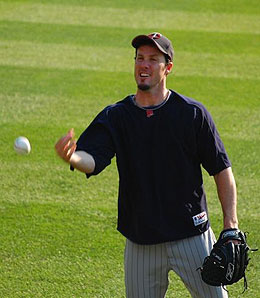 If Joe Nathan and the Twins can’t agree on a contract extension, the closer could become trade bait.

The Pioneer Press has reported that the Minnesota Twins have made a contract extension offer to closer Joe Nathan in the $10 million per year range, but the 33-year-old wants more than that.

Nathan, scheduled to earn $6 million this season, can become a free agent at the end of the year. Talks were held between the Twinkies and Nathan’s people earlier this month and more are scheduled for next month, so this is not an impossible situation. Speculation exists that if Minny ups its offer to $36 million over three years, Nathan will stay on.

If the two sides can’t agree on terms and Nathan enters his walk year without an extension, suddenly Twins relievers like Jesse Crain, Pat Neshek and Matt Guerrier become a lot more intriguing because you’ve got to figure that Nathan won’t last the season in a Minnesota uni, and one of this trio will be elevated into the closer role.

In other Twinkie news, how perfect is it that it is the Angels and Torii Hunter who will visit on Opening Night?

By the way, team owner Carl Pohlad – who is 92 freaking years old – plans to head down to Fort Myers, Fla., in three weeks to watch his team. First of all, how can he plan so far ahead at his age? Second of all, at this time of the year, shouldn’t he already be down in Florida with the rest of the geriatric set, eating dinner at 4 p.m. and getting to bed by 7 p.m.?

By RotoRob
This entry was posted on Monday, February 25th, 2008 at 2:08 pm and is filed under BASEBALL, RotoRob, Rumours. You can follow any responses to this entry through the RSS 2.0 feed. You can leave a response, or trackback from your own site.