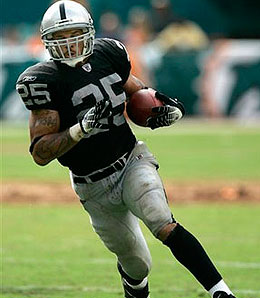 Justin Fargas provided one of the few bright spots for Raider Nation in 2007. (AP Photo/Alan Diaz)

The Raiders were brutal again in 2008. Luckily though, there were a few rays of hope in Oakland. Running back Justin Fargas gained over 1,000 yards on the ground and helped the Raiders rank sixth in the league in rushing. On the defensive side, the Raiders flashed glimmers of hope in the secondary with cornerback Nnamdi Asomugha. Despite having just one interception last season, he remains one of the Raiders’ best and brightest on defense. In front office matters, 78-year-old owner Al Davis reportedly drafted a letter of resignation for head coach Lane Kiffin to sign. Actually, while Davis is crazy and perhaps a tad senile at this point, I just enjoy him thoroughly. He is pure high comedy.

The bad news for Raiders’ fans was that Daunté Culpepper proved us right. We mentioned that Culepper has never shown any ability to be a competent quarterback without Randy Moss being one of his receivers. There was nobody like Moss catching passes for Oakland (even Santana Moss would have been an upgrade), and Culpepper limped to a 78 passer rating. LaMont Jordan had a couple good games, but not nearly enough to help fantasy owners. Basically, the offense was a wasteland aside from Fargas.

The Raiders have just under $26 million of salary cap space, which is among the better financial situations in the league. The team is not in horrible shape defensively. The front office made a wise decision and applied the exclusive franchise tag to Asomugha. However, Oakland could use another edge pass rusher and a solid defensive tackle with the departure of Warren Sapp. With a young quarterback like JaMarcus Russell, a big play receiver would greatly help. By the way, remember when Jerry Porter was relevant? I barely do either. The Raiders are rumoured to be planning on selecting Darren McFadden in the draft with the No. 4 overall pick. We’ll deal with the running backs in further detail later.

There are a lot of rumblings that the Raiders will be hoping to grab McFadden with the top pick. That’s alright, but we have a better idea. Take an offensive or defensive lineman here, promote Michael Bush to the starter role, and let the Jets grab McFadden. That way, fantasy owners will gain a potential stud in McFadden and a potential sleeper in Bush. We just want the most people possible to be happy here.

Quarterbacks – As far as we know, Russell will have every chance to win the Raiders’ quarterback gig. The only other signal caller currently under contract with the team is Andrew Walter. Hey, stop laughing! This is serious! Think about Raider Nation. You’re hurting its feelings.

Running Backs – All of a sudden the Raiders’ backfield situation has some depth to it potentially. Fargas is coming off a 1,000-yard season and recently re-signed. Dominic Rhodes and Jordan will be back with the team for the moment. Meanwhile, Bush will try to return from his leg injury. According to a certain RotoRob fantasy football writer, he should be able to contribute in the near future. If the team elects to draft McFadden at four, then Rhodes or Jordan are probably out because that’s a lot of coin to put into the running back position. Our gut tells us they’ll bite the bullet, take McFadden on draft day and get rid of either Jordan or Rhodes.

Wide Receivers – It’s never good when a team’s top wide out option is someone who would be better suited as a slot receiver. Hell, Ronald Curry would be battling backups for a roster spot on some teams in the league. Oakland would be wise to look at some free agents (D.J. Hackett?) and take a few fliers in the draft.

Tight Ends – With that cast of characters at wide out, the Raiders could actually look to their division mates, the Chiefs and Chargers, and go with the easier offensive blueprint of dominant line, dominant running game, and dominant tight end instead of worrying about the guys wearing the jersey numbers in the 80s. It doesn’t sound like an Al Davis plan, but consider this: Since Antonio Gates started for the Chargers, the Raiders are 0-8 against them. They are 1-9 against the Chiefs since 2003. Whether that’s enough to sway Davis is beyond us, but it’s compelling nonetheless.

Defense/Special Teams – The Raiders are on the verge of having a solid defense. Their secondary is up and coming. The linebacking corps showed signs of life including outside linebacker Thomas Howard, who intercepted six passes in ’07. Defensive end Derrick Burgess had a down year which is why they may need help along the defensive line to take pressure off of him. His sack totals have dipped from 16 in ’05, to 11 in ’06 to eight in ’07. Meanwhile, their special teams unit is a snooze factory bereft of game breakers.

We hope to see Russell progress. That’s the key to this season. If McFadden is drafted to the Silver and Black, then how he does, and how those two develop a rapport will also be a focus. Sadly, we don’t anticipate any fantasy football worthy players aside from the potential running back spot, which could turn into a committee anyway.

By Andy Goldstein
This entry was posted on Sunday, February 24th, 2008 at 6:11 pm and is filed under Andy Goldstein, Derek Jones, FOOTBALL, Team report. You can follow any responses to this entry through the RSS 2.0 feed. You can leave a response, or trackback from your own site.