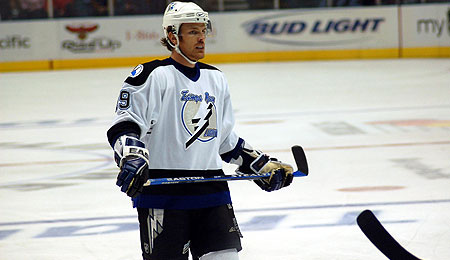 If Brad Richards gets dealt, what will be the fantasy impact?

How will the trade deadline affect your fantasy team? Well, there are two ways to think about it. First off, if your player is, say, Brad Richards and he gets moved, remember these key points: 1. Has the player been slumping or scoring? 2. What quality of linemates is he leaving? 3. What quality of linemates will he be joining? Slumping players who get moved tend to get a little boost right after a trade, and in some cases, achieve instant chemistry with their new team.

The second thing to consider is the indirect effects of a trade. Again, let’s take Richards for an example. If he gets moved to Columbus as is rumoured, Rick Nash’s scoring pace should stay stable or go even higher. That’s not that consequential, as Nash is owned in every fantasy league on the planet. But what about the third guy on the line? Would it be Fredrik Modin, Nikolai Zherdev, or someone else coach Ken Hitchcock experimented with? Whoever it is, there’s a chance that he may be available in your fantasy league. On trade deadline day, think about that domino effect whenever you see a move and make your decisions accordingly.

Sure, there’s all this trade talk going on, but there’s still hockey to be played. Sidney Crosby’s due back pretty soon, and with Evgeni Malkin rocketing up to the top of the scoring race, does that mean Crosby’s return will slow Malkin down? I doubt it; in fact, I think this only gives Pittsburgh more flexibility as Crosby and Malkin had spent some time together on the same line. With Malkin doing everything on his own right now, look for the two to anchor their own lines except during critical times during games. This means that four lucky wingers will get to share time on lines with either Crosby or Malkin, so keep your eye on the situation in Steel City to see who’s skating with who.

Looks like someone finally told Tomas Vanek that he’s getting paid a whole crapload of money. The beleaguered winger has had a pretty good past two weeks with 11 goals. At the same time, the Sabres have been chugging forward in the standings. Will Vanek keep it up? As Vanek goes, so do the Sabres — check out their record when he scores — and since Buffalo seems to have found its groove, look for Vanek to come back down to earth a little bit but still remain fairly hot for the rest of the season. If you’ve been looking to move him, now’s the time as his trade value’s peaking.

Simon Gagne’s shutting it down for the rest of the season, and if you own him in a keeper league, it’s best to make a contingency plan now. Concussions have a scary way of accumulating, and despite Gagne’s talent, there’s no doubt that each concussion suffered will have lingering effects. My suggestion? Hold on to Gagne until next season on IR, then try to move him once he hits a hot streak.

There is still hockey being played in Los Angeles even though the Kings fell off the NHL map a few months ago. One of the guys leading the charge could be a good sleeper pick for anyone down the stretch. Patrick O’Sullivan’s had a good February with 11 points in 10 games. With the Kings playing for next season already, look for O’Sullivan to get more playing time in the last couple of months.

By Mike Chen
This entry was posted on Friday, February 22nd, 2008 at 8:13 pm and is filed under HOCKEY, Ice Chips, Mike Chen. You can follow any responses to this entry through the RSS 2.0 feed. You can skip to the end and leave a response. Pinging is currently not allowed.