Will Braves Have Enough Pitching? 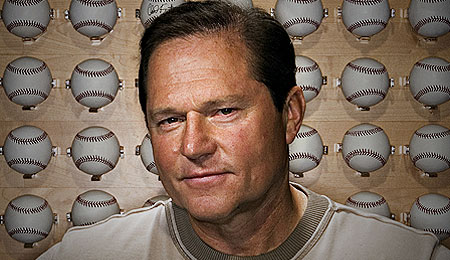 If the Braves plan to pen Mark Teixeira to a contract extension, they’ll have to deal with Scott Boras, a scenario very few find pleasurable.

Okay, now that Alex Rodriguez has ditched him and Gary Sheffield is bad mouthing him, we have determined that the only person who still likes Scott Boras as his agent is Mark Teixeira.

That’s going to be fun come contract negotiation time when the Braves try to lock Teixeira up to a long-term deal before he becomes a free agent after the 2008 season. Good luck with that; Boras is going to want at least $20 million per season for the switch-hitting slugger.

And why not? If Teixeira can duplicate what he did last year (recording a 1019 OPS and driving in 56 runs in 54 games after coming over in a trade with Texas), he’s going to be worth a serious amount of coin.

But a bigger question is, can Teixeira help get Atlanta back to the postseason, now two years out of that promised land after making it for 14 straight seasons?

What I love most about this lineup is having switch-hitters in the three and four holes in Teixeira and Chipper Jones. Teixeira has reached 30 homers and 100 RBI in four straight years; Chipper, who just missed the mark with 29 dingers in 2007, has done it five times in his career (but not since 2001, thanks to a litany of injuries).

Jeff Francoeur, Brian McCann and Kelly Johnson add plenty of offensive support for those two, but the loss of Edgar Renteria and Andruw Jones will hurt. Replacing them are Yunel Escobar and Mark Kotsay, neither of whom are likely capable of putting up the same kind of numbers Atlanta got from those dearly departed players.

But of course, offense wasn’t the problem last year. The Braves scored five runs per game, third best in the National League. But after John Smoltz and Tim Hudson, the starting pitching was problematic. Sure, Atlanta finished third in team ERA in the NL, but that was mostly thanks to a much-improved bullpen corps.

The starting pitching was a mess. Smoltz and Hudson did their jobs, but Chuck James was disappointing as the No. 3 man. The fourth and fifth starter jobs were held by a cast of thousands, although Buddy Carlyle and Kyle Davies were the main men in this revolving door situation.

With long-time Brave hero Tom Glavine back in the fold, James can slide into a better-suited role as the fifth starter, while Atlanta is counting on Mike Hampton to hold down the fourth starter job this season. Of course, Hampton’s health has long been a concern, and James is also dealing with some shoulder woes, so the Braves may have to turn to Jair Jurrjens, Jo-Jo Reyes or Jeff Bennett for help.

Even with the loss of Andruw Jones and Renteria, this lineup will put up some runs. And I think the bullpen is in great shape with Rafael Soriano, Mike Gonzalez, Peter Moylan and Manny Acosta.

So it’s all going to be about starting pitching this season in Atlanta. Certainly the addition of Glavine helps stabilize this rotation, but beyond that there are too many question marks for me to feel comfortable in predicting a return to the playoffs for Atlanta. James needs to stay healthy and pitch more like he did in 2006 than last year; Hampton has a long way to go before his name is mentioned in the same sentence as ‘dependable’; Jurrjens has potential as does Reyes, but both are unproven.

Given the improvements the Mets and Phillies made this offseason, the Braves are going to be hard pressed to reach 85 wins, and that’s not going to be enough to be still standing come September 28.

By RotoRob
This entry was posted on Friday, February 22nd, 2008 at 12:43 pm and is filed under BASEBALL, RotoRob, Team report. You can follow any responses to this entry through the RSS 2.0 feed. You can leave a response, or trackback from your own site.