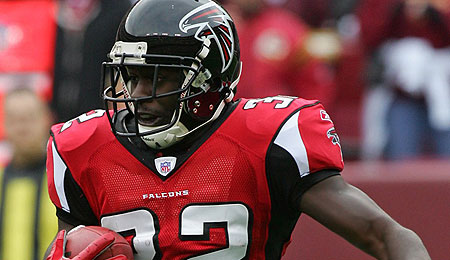 If Jerious Norwood doesn’t get 20 carries per game next year, there will be hell to pay.

BY ANDY GOLDSTEIN and DEREK JONES

The Atlanta Falcons are up next and we have one promise: We will keep the Ron Mexico discussion to a minimum.

Roddy White went right. The third-year wide out punctuated his year with over 1,200 receiving yards, good enough to finish in the top 10 in the league. White’s long-term value can be debated, and his six scores didn’t exactly set the fantasy world on fire, but his consistent yardage totals certainly saved some fantasy seasons out there. We will also go ahead and throw Jerious Norwood a bone. The Falcons’ backup averaged six yards per carry on 102 totes. It’s not his fault he couldn’t get more touches.

Warrick Dunn is no longer a sleeper back. He is no longer a “good value” pick, no matter when he is taken. Nope, Dunn is now Public Enemy No. 1. He is all that stands between Norwood’s 6.0 yards per carry average and your fantasy team from actually benefitting from it. Not that Dunn’s barely-over-three-yard average wasn’t helpful. If you started a defense against the Falcons, it was clearly advantageous. Also, the quarterbacks weren’t consistent. Even the great Byron Leftwich couldn’t salvage the Falcons’ offense.

The good news for Atlanta is that its offseason can only go up after last year. The Falcons would eventually lose the face of the franchise, quarterback Michael Vick, due to legal issues over dog fighting. All the while, they were led by a new first head coach who ended up fleeing the Atlanta nest late in the season. It’s a new day in Atlanta under the guidance of new head coach Mike Smith and offensive coordinator Mike Mularkey. Mularkey, the former Bills’ head coach, typically favours the running based on previous stints as an offensive coordinator in Miami and Pittsburgh.

Atlanta needs a quarterback, plain and simple. Both Miami and St. Louis have other priorities besides quarterback. That means Boston College QB Matt Ryan could fall into Atlanta’s lap at number three. Elsewhere, the Falcons need help with an offensive line that didn’t protect the passer or open up running lanes consistently. This is another team that could benefit from trading down and grabbing a surplus of picks. Atlanta ails considerably on both sides of the football.

State Of The Team

Quarterbacks – Larry, Curly and Moe had nothing on the trio of Joey Harrington, Leftwich, and Chris Redman, who combined for 18 touchdown passes and 15 interceptions in 2007. Atlanta has already taken steps to fix this situation by releasing Leftwich. Heading into ’08, the Falcons need to use their first-round pick on a quarterback, presumably Ryan. From a personnel standpoint and a PR perspective, it makes the most sense. Ryan has a chance to help Atlanta distance itself a bit more from the Vick debacle. However, look for a veteran free agent (or Harrington) to be the starting quarterback in 2008. Typically, in the last few years, most teams have opted for their rookie signal callers to ride the pine and learn early.

Running Backs – If Norwood doesn’t get a chance at 20 carries a game, we will start a grassroots Internet campaign to make the Falcons the first NFL franchise that is coached by fantasy football owners. Actually, that is probably our best idea ever.

Wide Receivers – Not to pat ourselves on our backs, but we always held out some hope for the Falcons’ wide out crew. Okay, we thought Michael Jenkins was a better option than White, but the point is that we’re awesome. Anyway, after White, Jenkins makes for a decent second option and even Laurent Robinson showed flashes. This is the one offensive position that Atlanta can flat out ignore for a few years (assuming it keeps their top three).

Tight Ends – Crumpler is gone, which we’re perfectly content with. It will give Crumpler a chance to be effective on a team with an established offensive game plan and allow the Falcons’ wide outs to come into their own. We suppose Martrez Milner will take over here. But maybe Atlanta will try to draft another tight end.

Defense/Special Teams – All I can say for Atlanta’s defense in 2007 is that it took the field. Otherwise, it was a disaster. Defensive end John Abraham led the team in sacks with 10, but had no help on the defensive line. The Falcons had a meager 25 sacks, 10 of them coming from linebackers and defensive backs. The kick return game for the Falcons showed some promise headed up by Norwood. Seriously though, it’s time for Morten Andersen to call it a career. I know he only missed three field goals last season, but is this league in such a dire need for kickers that the same guy keeps finding work for 25 years? That’s not a typo either. The man is pushing 50 for heaven’s sake.

By Andy Goldstein
Tags: Atlanta Falcons
This entry was posted on Friday, February 22nd, 2008 at 4:26 pm and is filed under Andy Goldstein, Derek Jones, FOOTBALL, Team report. You can follow any responses to this entry through the RSS 2.0 feed. Both comments and pings are currently closed.