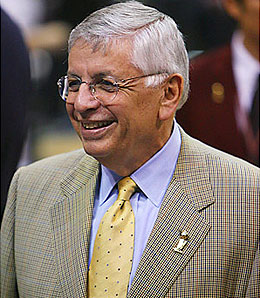 David Stern has somehow managed to deflect all the negative attention away from the NBA.

I. The All-Star Weekend

Part I of my NBA first-half report concentrated on the big picture for the NBA as David Stern and the league try to repair and recreate the league’s image. By all accounts, this weekend’s All-Star festivities in New Orleans were a success and off-the-court incident free (although who knows what types of stories we may hear in the next few days?). Despite the Jason Kidd trade saga dominating the weekend headlines (a deal finally consummated earlier this week), the real story of the weekend was the dunk contest.

As a kid, I remember the true excitement which came along with the dunk contest. Superstars like Michael Jordan and Dominique Wilkins were regulars in the contest and the All-Star Saturday night (which, back in the day, only included the three-point contest) was always the highlight of the weekend. Fast forward 10 years and the dunk contest has become a microcosm of the league’s lack of popularity with fans. Most fans have lost interest in the dunk contest as the contestants have not been major figures in the game and the dunks being performed have lacked creativity and excitement.

This year’s crop of contestants for the dunk contest was promising, as it included Dwight Howard, one of the league’s brightest young superstars, Gerald Green, last year’s champion who brings the creativity that the contest has been lacking in recent years, Rudy Gay, an emerging star who can jump out of the gym, and Jamario Moon, a feel-good story who has impressed so many with his play in his rookie season. Wow – did these guys ever put on a show! Howard and Green dueled through a series of dunks that had the crowd of fans and NBA players in awe. If you haven’t seen the Superman, Happy Birthday or the behind-the-backboard dunk, check out You Tube as soon as possible. The phenomenal performances in the dunk contest this weekend are promising for the future of the NBA as its popularity is starting to finally rise again. Hopefully, the NBA can build on the momentum of the first-half and the All-Star weekend and continue to raise the ante to bring fans back to the sport.

The remainder of Part II of our NBA first-half report focuses on the individual players who have made headlines for their stellar performances. My list of fantasy studs is not your typical list of standouts. Everyone knows that LeBron James, Kobe Bryant, Tim Duncan, Amare Stoudemire and Carmelo Anthony are having phenomenal seasons. Instead, my list will focus on players who have taken the NBA by storm with their play in the first half of the 2007-08 season.

In Josh Smith’s four seasons in the NBA, he has improved every year in points, blocks, assists and steals. He is the new AK-47 of the league (without the crying, that is), as every night he consistently puts up a solid line in all major fantasy scoring categories. Smith is averaging 17.8 PPG, 7.8 RPG, 3.8 APG, 1.9 SPG and 3.1 BPG this season. The Hawks’ trade of Shelden Williams, Tyronn Lue, Anthony Johnson and Lorenzen Wright for Mike Bibby shouldn’t affect Smith’s numbers too much. Bibby is a solid point guard, but the knock on him has always been that he would rather create his own shot than create shots for his teammates. Look for Smith to continue to put up monster lines as the Hawks are fighting to make the playoffs in the East for the first time since 1999.

Kaman, dealing with injuries much of last season, took a step backwards from his stats in 2005-06. He went from 11.9 PPG and 9.6 RPG to 10.1 PPG and 7.8 RPG last year. Many predicted an improvement for Kaman this season because of the expected extra touches in the wake of Elton Brand’s injury and a lack of depth in the Clippers’ frontcourt, however, no one could have envisioned the kind of numbers Kaman produced in the first half. He is putting up a ridiculous 16.4 PPG, 2.96 BPG and 13.6 RPG, all of which obliterate Kaman’s previous career highs. Brand has begun limited work in an effort to return this year and if he come back, Kaman’s numbers will certainly decline, but the big man should remain a solid double-double guy even with Brand in the frontcourt.

In Chandler’s first five seasons in the NBA teamed with Eddy Curry on the Chicago Bulls, he never averaged 10 PPG or 10 RPG. Chandler showed flashes of excellence with the Bulls, mainly because of his intensity and work ethic, however, constant back injuries led Bulls’ owner Jerry Reinsdorf to run the big man out of town, replacing him with an aging Ben Wallace. Since leaving Chicago, Chandler has excelled in his year and a half with the New Orleans Hornets. The Hornets lead the Western Conference at the All-Star break in part because of Chandler’s comfort in playing with Chris Paul. This season, Chandler is averaging 12.1 PPG and 12.5 RPG (both career highs) and is shooting the second highest field goal percentage (60.6 per cent) in the league. The playoff push will certainly put its toll on the young Hornets’ team, but do not expect Chandler’s numbers to significantly decrease in the second half.

Despite the pressures of being the centrepiece heading to Minnesota in the mega-trade which brought five young Celtics to the Timberwolves for Kevin Garnett, Al Jefferson has had a spectacular first half. Even with teams focusing their defensive efforts on Jefferson because of the lack of production from other T-Wolves, Jefferson has already exceeded all expectations. He is averaging 21.2 PPG, 12.1 RPG and 1.4 BPG for a young team that is years away from competing in the West. To his credit, Big Al has not allowed the team’s struggles to interfere with his development as one of the top power forwards in the league and there is no reason to believe his production will decrease in the second half.

Once the face of the Lakers’ rebuilding plan and the focus of Kobe’s ire with the team, Andrew Bynum has quickly become one of the most promising young big men in the league. Before his injury, Bynum was enjoying his breakout campaign this season, as he and Kobe were leading the resurgent Lakers to one of the top records in the Western Conference. Under the tutelage of Kareem Abdul-Jabbar, Bynum was averaging 13.1 PPG, 10.2 RPG and 2.1 BPG in just his third year in the league, and was also leading the league in field goal percentage at 63.6 per cent. Of course, the trade for Pau Gasol will affect Bynum’s numbers significantly, assuming the youngster returns to the Lakers during the regular season. If you have Bynum in a keeper league, be patient and you will reap the benefits for many years to come.

Here a few other fantasy studs from the first half of the 2007-08 NBA season worth noting:

Rudy Gay — In only his second year in the league, Rudy Gay has elevated his game and is providing the scoring the Memphis Grizzlies need with the departure of Gasol. Gay is averaging 20 PPG, 6.2 RPG, 1.8 APG and 0.8 BPG. Look for these numbers to increase with the loss of Gasol as Gay and Mike Miller will attempt to fill the void.

Brandon Roy: Roy is another second-year player who has had a phenomenal first half. As the floor leader for the Portland Trailblazers, he has put up fantastic fantasy statistics. Roy is averaging 19.7 PPG, 5.8 APG, 4.7 RPG and 1.0 SPG. Look for his success to continue in the second half even with the added pressure of trying to compete in the West with such a young, inexperienced team.

Monta Ellis: Despite Don Nelson’s change-the-lineup every game philosophy, Monta Ellis, in only his third year in the league, has secured the starting two-guard spot next to Baron Davis for the Warriors. Ellis’ fantastic shooting (53.2 per cent) and his consistent scoring (18.7 PPG) has delighted fantasy owners this first half. With the Warriors scoring the most points in the league, look for Ellis’ numbers to continue to impress.

Hedo Turkoglu: With the addition of Rashard Lewis, and the development of Dwight Howard and Jameer Nelson, the Magic looked poised to compete in the East this season. However, no one could have possibly imagined that Hedo Turkoglu would arguably be the team’s first half MVP with his consistent stellar performances. Smart owners who picked Turkoglu up off the waiver wire early in the season have reaped the rewards of thanks to his 19.5 PPG, 6.1 RPG, 4.6 APG, 1.0 SPG and 82.7 per cent shooting from the foul line (all career highs).

David West: The other All-Star from the New Orleans Hornets (see Part I for discussion of CP3’s fantastic first half) is also enjoying career highs in almost all fantasy categories. West is scoring 19.8 PPG, while averaging 9.2 RPG, 2.3 APG and 1.4 BPG while shooting 84.4 per cent from the line. Look for the good times to continue to roll in the Crescent City with the consistent play of West, Chandler and CP3.

Click here for the first part of this article.

By Jordan Frank
Tags: NBA
This entry was posted on Friday, February 22nd, 2008 at 10:14 am and is filed under BASKETBALL, Jordan Frank. You can follow any responses to this entry through the RSS 2.0 feed. Both comments and pings are currently closed.