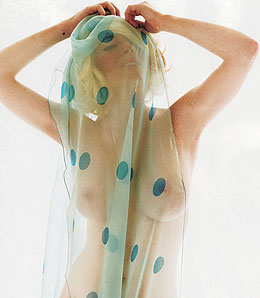 No, Lindsay Lohan isn’t dating an athlete (that we know of), but it appears she has a thing for wrestlers, showing up Monday at the Honda Center for WWE Raw and appearing in some photos with John Cena, Rey Mysterio and Floyd Mayweather (hey, I don’t know who the frig these dudes are, but if you’re into wrestling, you probably do).

Clearly, LiLo is clamouring for some attention these days.

For those of you living under a rock, Lohan recently posed naked for New York Magazine, paying homage to the classic Marilyn nude photo shoot done 46 years ago by Bert Stern, the same photographer who took the LiLo shots.

I love the fact that Lindsey took her baby sister with her to the photo shoot (“now here’s how to be a real skank, kiddo”). That’s all class.

The best part? There was some speculation that LiLo was tricked into doing this photo shoot. Classic celeb site What Would Tyler Durden Do? had this to say about the idea that Lohan could have been duped into posing nude:

“If it was a hot day, you could put your penis through a cup lid and draw red stripes on it and get oral from her for at least 5 minutes. At least 5.”

Last weekend, Eva Longoria and Tony Parker spent the weekend in Mexico. Parker would have normally been at the NBA All-Star game, but he was injured, so instead he crossed the Rio Grande for a little R and R.

No, there’s nothing particularly racy about that, but it’s a good excuse for us to see Eva applying some sunscreen.

Nice to see that she isn’t letting herself go since getting married. Bow chicka bow.

Jessica Simpson’s latest movie, Blonde Ambition, absolutely crashed in North America, grossing a mere $1,771 in its opening weekend in December in eight Texas theatres, according to People.com. And you have to know that at least half of that money was spent by Tony Romo’s teammates, who were likely there just to throw popcorn at the screen.

However, it appears that the movie has hit the big time – in Ukraine, where it soared to No. 1, grossing $253,008 for the weekend of February 14-17, according to Box Office Mojo.

Apparently, no one is throwing perogies or borscht at the screen for this one. I’m sure there are plenty of Cowboy fans who would like nothing more than to see her sent to Ukraine on a one-way ticket.

By RotoRob
Tags: Floyd Mayweather, Honda Center, John Cena, Lindsay Lohan, Marilyn Monroe, Rey Mysterio, WWE Raw
This entry was posted on Friday, February 22nd, 2008 at 6:29 pm and is filed under RotoRob, Squeeze Play. You can follow any responses to this entry through the RSS 2.0 feed. Both comments and pings are currently closed.