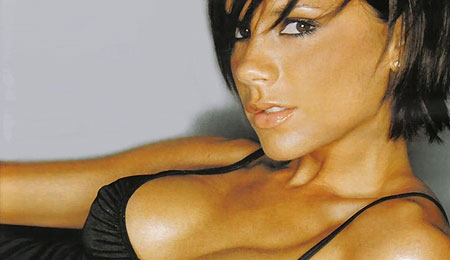 Want to know the real reason why a frazzled female fan fainted in the presence of David Beckham? His wife Victoria is only too happy to boast about her hubbie’s greatest assets.

Soccer stud David Beckham was at it again last week, causing a stir at Jermaine Dupri’s pre-Grammy party at Club Central in Hollywood.

It seems that a young female fan got a bit overexcited, actually fainting after receiving a peck on the cheek from Beckham. Oh come on, was that all? Maybe that 25-foot penis of his – you know, the one that Victoria was bragging about – brushed up against her and it was all too much for such a sweet, young thing. That’ll happen you know. Well, so I hear, at any rate.

It seems everyone and his brother (especially those who are Cowboy fans) would love to see these two head to Splitsville, but instead, they were on their way to Hawaii last weekend for the Pro Bowl. Apparently, the pair is still trying to make a go of it, despite rumours that Romo tried to break up with Simpson last month.

However, upon arriving at LAX on Monday, they were reportedly walking with quite a bit of space between them. Perhaps Jessica wouldn’t play nice and wear a coconut bra for Tony. No wonder he was a bit icy upon returning to the mainland.

Obviously, they got past that, as the two were seen sharing chocolate-covered strawberries in a Dallas restaurant on Valentine’s Day. Me? Personally, I prefer to be hand-fed raspberries, but hey, whatever works for you.

But the real kicker here was that she chose to speak in a Blog interview – on YouTube!

Being interviewed by actor/comedian Sam Harris, Moynahan was asked “What was the most difficult thing about the pregnancy?”

So while she chose not to slag Brady directly, she was certainly alluding to him. Obviously the toughest part was pumping out a pup without her Patriot. In a word, Moynahan was ‘Giseled.’

She began the interview with six-month old John Edward Thomas Moynahan in her arms – but he was off camera. Later, she asked: “Shall I get rid of the baby?”

Uh, sorry Bridget, it’s a bit late to be punting this pregnancy.

Click here to view the complete interview; it’s nine minutes and 59 seconds of your life that you will never get back.

By RotoRob
Tags: Soccer
This entry was posted on Saturday, February 16th, 2008 at 6:21 pm and is filed under RotoRob, Soccer, Squeeze Play. You can follow any responses to this entry through the RSS 2.0 feed. Both comments and pings are currently closed.