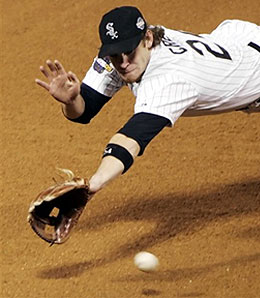 How will Joe Crede’s back feel when he has to dive for a ball? Once we determine that, we’ll know what both his and Josh Fields’ value looks like to begin 2008.

It looks like Josh Fields might land the third base job for the Chicago White Sox after all.

Manager Ozzie Guillen said that Fields, ranked 20th among third baseman in our mid-season rankings last year, will likely man the hot corner to start the season for the Pale Hose as incumbent Joe Crede is still recovering from back surgery that ended his 2007 season prematurely.

While this news would appear to boost the value of Fields, the wild card here is that Crede has yet to report, so we’re still not sure where he’s at in his recovery process. If Crede is healthy, a more likely scenario would see the two splitting the job, thereby making each of them shaky fantasy plays to begin the season.

However, if Crede comes to camp, is 100 per cent recovered and resembles the man who enjoyed a breakout season in 2006, all bets are off – the job is his.

The White Sox are expecting Crede to be able to go through all Spring Training drills without any limitations, but until he actually does so, this is a situation you’ll be best off monitoring.

By RotoRob
This entry was posted on Friday, February 15th, 2008 at 8:41 pm and is filed under BASEBALL, RotoRob. You can follow any responses to this entry through the RSS 2.0 feed. You can skip to the end and leave a response. Pinging is currently not allowed.