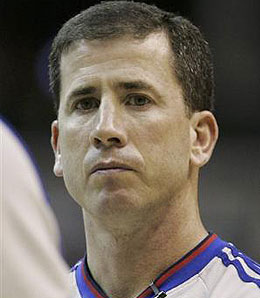 As evidenced by an exciting first half, rumours of the NBA’s demise in the wake of the Tim Donaghy scandal were greatly exaggerated.

As the focus of the NBA landscape shifts to the Big Easy for this weekend’s All-Star Break festivities, the break in league play gives us a chance to reflect on the big stories of the first half of the 2007-08 season – and what an amazing first half of basketball it has been.

I. The Tim Donaghy Aftermath

Remember him? When former NBA referee Tim Donaghy plead guilty to two felony charges stemming from a basketball gambling scam after last season, many prognosticators predicted the sky would fall on David Stern and the league. Remarkably, one of the biggest scandals in league history has become merely an afterthought. Stern has masterfully taken control of the situation by enforcing new measures designed to monitor and evaluate each referee in the league. Of course, it makes the commish’s job much easier when the focus of the basketball world has actually been on the court. Starting with the Celtics’ call-to-arms offseason and continuing with the unprecedented amount of talented teams in the West, this first-half has been spectacular and nearly court incident-free in terms of off-the-court exploits. As of Thursday, only 4.5 games separate the top nine teams in the Western Conference!

Donaghy’s sentencing hearing has been rescheduled to take place in April, just as the NBA playoffs will begin. It will take all of Stern’s ingenuity to keep the NBA spotlight where it belongs – on the games. Last year’s playoffs helped the league make great strides in repairing its battered image. If the playoffs this year are half as exciting, Stern should not find it difficult to deflect elsewhere the attention the Donaghy scandal will undoubtedly receive.

II. The Year of the Point Guard

The most riveting aspect of this year NBA’s season has been the emergence of several young stars and domination of old time veterans at the point guard position. The position is so deep that the All-Star game could easily include eight to 10 point guards. The following floor leaders are enjoying career seasons:

Baron Davis: Just take a look at B-Diddy’s numbers this year: 39.4 MPG, 21.7 PPG, 8.0 APG, 4.8 RPG and 2.5 SPG. Davis has always been a solid fantasy point guard, but his frequent injuries and low shooting percentages have always caused concern for owners. Since coming back from a knee injury near the end of the regular season last year, he has simply been on fire. His FG and 3-point percentages are near career highs. Davis ranks ninth in the NBA in minutes per game and Golden State is scoring the most points per game in the association. Davis is the perfect compliment to Steven Jackson, Monta Ellis and Al Harrington as he can run the floor and find his guys spotting up.

Steve Nash: How can a two-time MVP possibly top himself? Easy – Nash leads the league in assists (11.7 per game), is shooting a career-high 46.6 per cent from three-point range, and is shooting near career highs in FG percentage (50.7 per cent) and FT percentage (90.3 per cent). Only Davis has made more three pointers than Nash as a point guard but Captain Canada’s 3-point percentage is 12 points higher than Davis’. Of course, it is business as usual, as the Suns have the second best record in the West, one-half game behind the shocking New Orleans Hornets. This leads me to…

Chris Paul: Wow. What can you say about CP3 that hasn’t already been said? In only his third year in the league, Paul has led his team to the best record in a loaded Western Conference. He is averaging 20.5 PPG, 10.9 APG and a league-leading 2.5 SPG. Paul’s success can be linked to his comfort and confidence in his teammates and his ease in getting to the hole and keeping his dribble alive in a Nash-esque manner. Tyson Chandler has said numerous times that Paul “always knows what he [Chandler] is going to do.” Chandler, David West, and Peja Stojakovic have all benefited immensely from Paul’s ability to break down defenses, squeeze through traffic and find open teammates.

Deron Williams: Because of all the firepower in the Western Conference, the Utah Jazz has crept up on people by winning 15 of their last 17 to put themselves right in the thick of the Western Conference. The team is led by third-year stud point guard Deron Williams, who is averaging 19 points, 9.7 dimes and three rebounds per game, while shooting an incredible 51.4 per cent from the field. As he’s matured, Williams has begun taking advantage of his size against smaller opponents, as he ranks 26th in the NBA in free throw attempts with 265 (the only point guards with more are Allen Iverson, Chauncey Billups and Davis) and he’s shooting 80 per cent from the line.

Jose Calderon: The biggest surprise of the year has been the incredible play of Jose Calderon. Beginning the season as a backup, Calderon seized his opportunity to play when T.J. Ford went down with a neck injury. Despite Gilbert Arenas’ recent comments, Calderon deserves to be an All-Star. In only 31 minutes per game, the Spanish Fly is averaging 12.8 PPG and 8.8 APG with fantastic percentages (47.2 from beyond the arc, 92.3 per cent from the line and 54.4 per cent from the field). In 35 starts for Toronto, Calderon has kept his turnovers low (1.8 per game) and it is easy to see how he has become the league’s most efficient point guard with his incredible shooting percentages, truly amazing considering the knock on him as a rookie was that he couldn’t shoot well, especially from outside.

If you didn’t believe me that the point guard position is completely stacked in both conferences, here is a list of other point guards having extremely productive seasons:

Everyone knows that the ante keeps rising in the West with the mega-trades that are continuing to take place. In the last month, the Lakers and Suns pulled off huge deals, while the Mavericks appeared to have made a move to get Kidd before Devean George pulled the carpet out from under Mark Cuban’s feet, at least for now.

Only a few weeks ago, the Lakers got Pau Gasol for Kwame Brown’s expiring contract, rookie Javaris Crittenton and two first round picks. If you think the rest of the West wasn’t petrified by this trade, just take a look at Spurs’ head coach Gregg Popovich’s comments regarding the trade. He stated that “what they did in Memphis is beyond comprehension,” and further said that “there should be a trade committee that can scratch all trades that make no sense.”

Since that deal, Shaquille O’Neal was traded to the Suns and, as mentioned, Kidd was nearly traded to the Mavericks. The most fascinating aspect of these trades is not the players involved. It is not uncommon for NBA superstars to be traded, even during the primes of their careers. Just think about Wilt Chamberlain, Kareem Abdul-Jabbar, Charles Barkley, and even Shaq, previously. All were traded during the prime of their careers to a contending team that needed an extra piece or two to compete at the next level. What is so amazing about the latest batch of NBA superstar trades, and what sets them apart from other mega-trades in the past, is the quality of teams who are making these moves and the matching of multiple superstars on the same team.

The sentiment shared by GMs and most coaches in the post-Michael Jordan era has always been that two (or more) superstars cannot play together. Just look at Kobe Bryant and Shaq. While incredibly successful together, their egos could not keep a championship team that won three straight titles together. (Could you ever imagine Michael Jordan and Scottie Pippen breaking up the 1994 Bulls because the two could not get along?) I’m also reminded of the 1999 Rockets team with Pippen, Barkley and Hakeem Olajuwon. However, since the AI trade to Denver and the Celtics’ deals to bring together Ray Allen, Paul Pierce and Kevin Garnett, it seems to me that GMs are less hesitant to match superstars together. This new trend has created some monstrous teams in the West and one loaded team in the East (although I’m sure Detroit believes it should be included). I will be on the edge of my seat watching how the West will pan out this season and whether any other big trades will be made before the February 22 trade deadline.

By RotoRob
This entry was posted on Friday, February 15th, 2008 at 10:38 am and is filed under BASKETBALL, Jordan Frank, RotoRob correspondent report. You can follow any responses to this entry through the RSS 2.0 feed. You can skip to the end and leave a response. Pinging is currently not allowed.