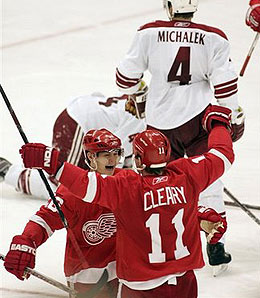 Fantasy owners will be without Dan Cleary for the next few weeks as he eats his meals through a straw.

Yesterday may have been Valentine’s Day, but there’s not a lot of hugs and kisses being given around the league this time of year. In fact, as the race to grab a playoff spot intensifies, players get downright mean with each other.

Over in Edmonton, Sheldon Souray, the offensive defenseman who’s struggled with his offense, is out for the season following arthroscopic surgery on his shoulder. If you still had Souray on your roster, thinking he was ready to build on his three goals and seven assists, now is the time to admit to yourself that he wasn’t the best choice you ever made.

Over in Detroit, Dan Cleary is out six-to-eight weeks with a broken jaw. His 20 goals and 20 assists were a quiet, steady support for many fantasy rosters. And how can you not love the symmetry of his stats?

Detroit has other problems, too. Goalie Dominik Hasek is temporarily on the shelf with hip flexor pain. He isn’t expected to be out for very long, but unless these types of injuries have a chance to fully heal, they often come back, haunting a goalie like an angry ex-girlfriend. In the meantime, Chris Osgood, Hasek’s other, if not better, half, should see the bulk of the goaltending action.

Hasek isn’t the only goalie feeling some pain. Blackhawks goalie Nikolai Khabibulin is expected to be out up to six weeks with a sprained knee. He hurt it Friday night against the Wild. Not only is it sad for Khabibulin, it’s sad for fantasy owners who were counting on Chicago moving him to a more competitive team. Imagine what his .902 save percentage and 2.74 goals against average would look like behind a defensively experienced team.

Of course, not all NHL news was bad news this week. There were actually some incidents that didn’t involve injuries. For instance, you might have heard Ottawa traded forward Patrick Eaves and defenseman Joe Corvo to Carolina for forward Cory Stillman and defenseman Mike Commodore. In terms of the forwards, Carolina gives up a 21-goal, 26-assist winger for a four-goal, six-assist one. In terms of the blueliners, Carolina gets a six-goal, 22-point defenseman and surrenders a solid, stay-at-home defender, who’s not going to put up a lot of points.

Stillman will probably spend some time bouncing around Ottawa’s top line as coach John Paddock looks to get scoring out of at least one of his now bottom three lines. Carolina might regret trading Stillman now that leading scorer Rod Brind’Amour is out for the season with a torn knee ligament.

By Steven Ovadia
This entry was posted on Friday, February 15th, 2008 at 11:38 am and is filed under HOCKEY, Ice Chips, Steven Ovadia. You can follow any responses to this entry through the RSS 2.0 feed. You can skip to the end and leave a response. Pinging is currently not allowed.