Next Generation: Trade Deadline on the Horizon 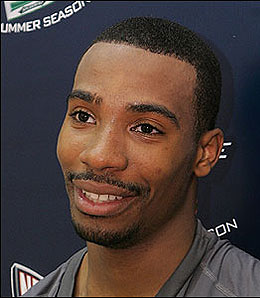 Javaris Crittenton is expected to get every chance to show what he can do, especially if Memphis makes another deal. (MSG Photos)

The NBA trade deadline is rapidly approaching (February 22), and we’ve already seen Pau Gasol, Shawn Marion and Shaquille O’Neal moved in NBA landscape-changing deals. Before the next trade is made, the time is now to identify the rookies that stand to gain the most from additional manoeuvres. Next Generation has listed five first-year players that may receive a boost in value based upon trades that may happen over the next week and a half. Unsuspecting owners may now be likely to trade away these five for next to nothing, but the same cannot be said after some rumoured trades take place.

Without further ado, let’s count up:

5. Javaris Crittenton, PG, Memphis Grizzlies: The Gasol trade was widely panned by coaches and GMs throughout the league, particularly those competing with the Lakers for playoff positioning. Therefore, Crittenton will be given every opportunity by the Grizzlies to prove that the trade was not nearly as lopsided as everyone figured it to be.

Area of Opportunity: Memphis makes another trade before the deadline — If Mike Miller or any of Crittenton’s teammates residing in Memphis’ crowded backcourt situation get moved, I figure the 2006 McDonald’s All-American will see some minutes at both the one and the two. The Grizzlies have to sell the Gasol trade to their fans, and their best hope is to convince them that the team’s future is bright. Therefore, I have to believe Crittenton will be the beneficiary of additional minutes as they become available.

4. Thadeus Young, SF, Philadelphia 76ers: Over his last five games through Sunday evening, Young has averaged 31.6 MPG, scored 12.6 PPG and grabbed 6.0 RPG, along with an astonishing 58.7 FG% and 75% from the free-throw line. The rookie from Georgia Tech has turned the proverbial corner since Kyle Korver was traded to the Utah Jazz.

Area of Opportunity: Andre Miller is traded — Turning the keys of the offense over to Louis Williams would create an up-tempo style of play that Philadelphia has not seen since Allen Iverson was in town. The athletic Young would thrive at a quicker pace, with more opportunities to beat his man down the floor for easy buckets. Williams and Young are the future of this franchise, and Young owners should hope to begin this era sooner rather than later.

3. Juan Carlos Navarro, G, Memphis Grizzlies: Averaging nearly 29 MPG since Gasol was traded to the Lakers, Navarro figures to receive a consistent and healthy dose of minutes in the second half of the season. The Grizzlies have even experimented with a three-guard alignment featuring Mike Conley, Jr., Crittenton and Navarro.

Area of Opportunity: Miller is traded — Should Miller be dealt, more minutes and certainly more shot opportunities will fall into Navarro’s lap. Navarro’s friendship with Gasol was one of the main reasons he left the Spanish Pro League to play for the Grizzlies. As a result, I believe GM Chris Wallace feels an obligation to give Navarro consistent minutes after he assured him that the team didn’t consider he and Gasol to be a package deal. Wallace insinuated that Navarro could still be a prominent part of the team’s plans, depending on what happens in the offseason.

2. Sean Williams, PF, New Jersey Nets: Williams was replaced in the starting lineup on February 8 by Nenad Krstic, but the rookie has played inspired basketball in the two games since (13.0 PPG, 6.5 RPG, 2.5 BPG, 73% FG) . Playing behind Krstic gives Williams an opportunity to be utilized in favorable matchups and provide a spark off the bench.

Area of Opportunity: Jason Kidd is not traded and finishes the season with the Nets — If Kidd plays out the string in New Jersey, he may try to prove every team wrong that did not deem him worthy enough of a fair offer for Rod Thorn’s consideration. An angry and motivated Kidd makes everyone around him better, particularly those like Williams that are athletic enough to run the floor alongside the captain.

1. Joakim Noah, C, Chicago Bulls: While Noah’s play has been as erratic as his minutes, he’s posted some notable lines over the last several games. In particular, his 10 points and seven rebounds in a loss to Sacramento and six points and 10 rebounds in a defeat of Golden State provided merely a glimpse into his vast potential.

Area of Opportunity: Ben Wallace is traded — Some of the impetus to move Wallace is that Noah is the team’s centre of the future. A talented passer and a relentless rebounder, Noah perhaps stands to gain the most if the Bulls could find someone crazy enough to take Wallace and his sizable contract and diminishing skills (think GM Isiah Thomas).

By Steve Simon
This entry was posted on Tuesday, February 12th, 2008 at 12:42 pm and is filed under BASKETBALL, Next Generation, Steve Simon. You can follow any responses to this entry through the RSS 2.0 feed. You can skip to the end and leave a response. Pinging is currently not allowed.