Dear RotoRob: What Gives in the Magic Kingdom? 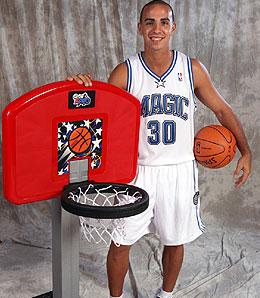 The sad reality is that Carlos Arroyo’s scoring average would likely not rise even if the NBA switched to these baskets. (Orlando Sentinel/Gary W. Green)

Long time reader, first time writing. I can’t understand how after all the coverage there has been about the point guard situation in Orlando there was no mention of last night’s developments in today’s Daily Dose.

Rotoworld went so far as to tell readers just a day ago that Jameer Nelson has fallen completely out of the rotation and he should be cut by owners. That same night, Nelson plays starters minutes and puts up respectable numbers for a guy “out of the rotation” coming off of two straight DNP-CDs. Meanwhile Carlos Arroyo played just over five invisible minutes. Where is the commentary on this in the Dose? And what is your personal opinion on that situation from here on out?

You’re definitely right that the Orlando PG situation should have been mentioned in that article. I try to cover off the key developments of the night, but at the same time, there are days when things get squeezed or overlooked. I assume as a long time reader, you’ll notice that we no longer write the 3,500-word team-by-team columns we did last year. That was proving to take way too much time every day, and there’s a limit to how much anyone will read, so we made an effort to alter the format this season.

Having said that, again, the Nelson situation should have been in there; my bad.

My sense of the situation here is that Nelson is the man, but he occasionally needs pine time to get a kick in the pants. Arroyo never seems to capitalize on those opportunities to really gain serious consideration as a long-term starter, so Nelson’s job remains safe for the long term. But he will continue to frustrate owners by disappearing from time to time. Right now, he’s back as the starter as you know, and he enjoyed a big performance Friday. How long this roll will last is anyone’s guess. I’d really like to see Nelson employ his long-distance game a bit more. It seems to me that when he’s hoisting them up from downtown more often (as he did two years ago), he’s at his best. That’s part of the frustration of owning him.

By RotoRob
This entry was posted on Tuesday, February 12th, 2008 at 10:33 am and is filed under BASKETBALL, Dear RotoRob, RotoRob. You can follow any responses to this entry through the RSS 2.0 feed. You can leave a response, or trackback from your own site.