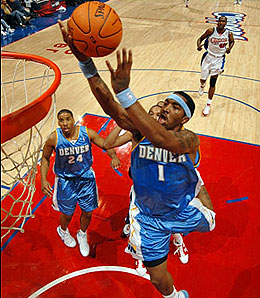 I am in a 10-team, eight-category Rotisserie keeper league and I have a question regarding who the best players are for my team from group below. Could you rate them from best to worst? (I am looking to add the best three players to fill out my wing positions.)

I know this is early, but I am wondering what type of player you think Ty Lawson will be, and what type of fantasy potential he has, because I am considering adding him to my team next year if he comes out from UNC. In the meantime, do you have any suggestions for a good PG pickup off the wire for this year?

From best to worst:

Lawson is quick off the dribble, maybe the fastest in the nation. But, he needs to get much better at decision making and protecting the ball against pressuring defenses. He can be good, but only if he figures out how to improve his court vision and basketball smarts.

As for a PG pickup, Daniel Gibson has been getting dropped from plenty of leagues. Check Boobie’s availability; as the season has progressed, he’s doing a better job keeping out of foul trouble, and I’m expecting a big second half from him, assuming Cleveland doesn’t land Jason Kidd, that is.

Do you think guys like Eddie Jones, Juwan Howard or Jamaal Magloire could really contribute for a fantasy team if given sufficient minutes ?

I enjoy your informative, but not too serious columns. Keep on going!

No, there is really no way for old guys like them to contribute meaningful fantasy numbers. Chris Webber is going to be another big FA addition that will disappoint.

As for the Raptors, Bargnani holds the C slot, but it is Bosh’s team to lead and he is often the one being guarded by the opposing centre. Friday, for instance, Chris Kaman was matched up against CB4, while Bargnani was mostly invisible. Of course, it’s not as if Rasho Nesterovic is seeing significant minutes and Kris Humphries’ DNP-CDs are starting to add up lately. So from that perspective, even through his inconsistent play, Bargnani remains the top option for the Raps.

By the way, say hi to Kelly for me.

By RotoRob
This entry was posted on Saturday, February 9th, 2008 at 12:12 am and is filed under BASKETBALL, Dear RotoRob, RotoRob. You can follow any responses to this entry through the RSS 2.0 feed. You can skip to the end and leave a response. Pinging is currently not allowed.