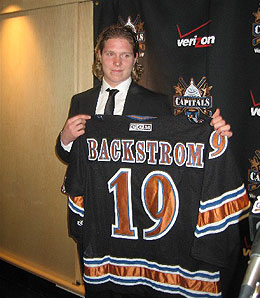 Nicklas Backstrom is chalking up the helpers as Alexander Ovechkin’s centre.

Best Super Bowl ever, blah blah blah. That’s right North America, turn off the gridiron and go to where the real battles take place — on ice with weapons in everyone’s hands and a frozen piece of rubber that goes over 100 mph. No more sissies that take an hour break between plays, let’s drop the puck!

(By the way, congrats to the New York Giants on a hell of a game.)

Welcome back (officially, for real, yes, he’s actually skating on the ice), Teemu Selanne. Two assists in two games is nice, but remember that returning players usually have a strong start due to adrenaline, then they hit a conditioning wall. Since Selanne’s game is based on speed and his usual centre (Andy MacDonald) is no longer with the team, look for Flying Finn to cool off after his initial burst.

Alexander Ovechkin’s been making headlines with his rush to the top of the goal-scoring chart, but who’s been riding shotgun during that burst? A quick look at Ovechkin’s past few games finds the bulk of the assists going to highly touted rookie Nicklas Backstrom (no, not the goalie, though that’d be something if he could play for two teams, stopping pucks while assisting on Ovechkin goals).

Has Peter Forsberg been snatched up in your fantasy league? He’s a good reserve guy to grab, but GMs should beware — that’s fantasy and NHL GMs. Forsberg’s already said no to about two-thirds of the league, but fans in Philadelphia, Colorado, and other short-list cities shouldn’t get too excited yet as his wonky foot wasn’t feeling that great after his last skate.

The Blue Jackets’ MVP this season has been goaltender Pascal Leclaire — look at the team’s record when Leclaire’s been out of the lineup. Well, the BJs will have to go without Leclaire again for a little bit. After getting sandwiched in a game against the Capitals, Leclaire’s sore neck will keep him out a few games. Someone on the BJs getting a sore neck? Insert your own dirty joke here.

Speaking of injuries, Chicago’s Jonathan Toews will be back any day now. What does that mean for the up-and-down Blackhawks? Add a top-line player back to any offense and everything from special teams to the top two lines will experience a positive bump. As for the other Hawks? Martin Havlat’s clashed with coach Denis Savard (including some not-so-thinly-veiled comments in the media), but he’s at least earned his big-time paycheque over the past week, picking up an assist in four straight games.

Who needs Joe Sakic and Paul Stastny when you’ve got T.J. Hensick? The young American rookie hasn’t had much success with the Avalanche this season, but he’s been on a tear over the past week with six points in five games. Another great young American player is Phoenix’s Peter Mueller, who’s been making Wayne Gretzky and Co. look pretty darn good. This first-round draft pick helped the Coyotes vault into the playoff picture with a Rookie of the Month-winning January. Where does Mueller shine best? He’s on pace for 30+ goals and, so far, a third of them have been on the power play.

By Mike Chen
This entry was posted on Saturday, February 9th, 2008 at 1:50 pm and is filed under HOCKEY, Ice Chips, Mike Chen. You can follow any responses to this entry through the RSS 2.0 feed. You can skip to the end and leave a response. Pinging is currently not allowed.