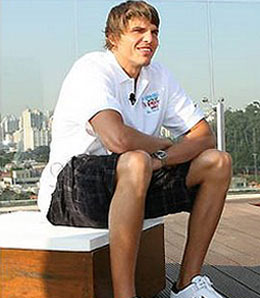 Ever since Kyle Korver arrived in Utah, the Jazz has been almost unbeatable.

Have you see how hot the Jazz is since acquiring Kyle Korver on December 29? I’m not saying he’s the reason, but his recent play definitely makes him someone to think about picking up off the waiver wire. Find out more about Utah’s roll and the role that Korver has played to make it happen in the Daily Dose.

Jarrett Jack is back in the starting five; Chris Paul is unstoppable; take another look at Thabo Sefolosha; Marcus Camby is back for the Nuggets; Kenyon Martin is heating up; Allen Iverson is putting up the double-doubles; and Carmelo Anthony keeps scoring, but can’t hit the clutch shot.

Need a break from designing your shirt for Scribtee? Why not pop on by to check out the Dose, where you’ll be fed a steady diet of fantasy basketball blurbs?

By RotoRob
Tags: NBA
This entry was posted on Thursday, February 7th, 2008 at 4:35 pm and is filed under BASKETBALL, NBA Daily Dose, RotoRob. You can follow any responses to this entry through the RSS 2.0 feed. Both comments and pings are currently closed.