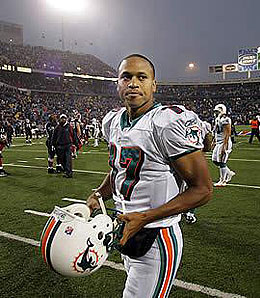 Sure, he guided them to their only win, but Cleo Lemon is not the answer for the Fish.

BY ANDY GOLDSTEIN and DEREK JONES

After a few well-deserved weeks off to catch our breath and sit back with a big bowl of cheese doodles (several bowls, actually) to watch the playoffs, Derek and I are back to kick off the RotoRob 2008 NFL off-season coverage. We’re going to start with team-by-team recaps, beginning at the very bottom of the heap.

So without further ado, let’s talk about the Dolphins (and yes, something does smell fishy here):

Obviously, for a team that eeked out but a lone victory, the Dolphins weren’t going to set the fantasy world on fire. Still, there were a handful of positives. Most notably, Ronnie Brown was a top fantasy back until his Week Seven injury. Brown’s season included a four-week stretch where he averaged 115 rushing yards and 1.25 touchdowns per contest. Regardless of what you think about him in the long run, and we’ll get to that, Brown proved he has the talent to be a legitimate top fantasy back.

Though he’s not on the team anymore, Chris Chambers also showed some life before being traded. That may not immediately pique much interest in the Dolphins’ passing game for 2008, but the team is built to have a top notch wide out. Ted Ginn has an extremely long way to go, but he is actually in a good situation. Shrewd owners will watch Ginn’s progress closely next season.

In a word: everything. Offensively, the Dolphins were as untalented as any team in the league. They finished 28th in total offense and 24th in total defense. Once Brown suffered the season-ending injury and Chambers was dealt to San Diego, the Dolphins dealt their only respectable skill players. The quarterback situation remains a disaster. Cleo Lemon and John Beck are not the answer.

Where to start? The Dolphins would probably be wise to build through their defense first. They’ve spent some good picks on offensive talent. Critics can take shots at Brown for his lack of durability and Ginn for his lack of, you know, talent, but the Dolphins are committed to them at this point. The defense has long been the mainstay of the team, but they are on their last legs. Young talent needs to be brought in, similar to how the Tampa Bay Bucs did it last year. That way, the vets can bring the youngsters up to their level. Justin Smith could become available, and he would be very attractive to many teams, including the Dolphins.

Watching New England in Super Bowl XLII should serve a valuable lesson to football fans everywhere. If a team can’t pass protect or rush the quarterback, it can potentially lose to anyone. The Dolphins nearly did just that in 2007. Their offensive line did not open up running lanes and their defensive line failed to generate pass rush.

Miami is rumored to be shopping around the first pick, which shouldn’t be a surprise because it needs a surplus of young players. If that falls through, look for the Fish to go for LSU DT Glenn Dorsey with the first pick.

It’s a young man’s game. The Dolphins need to get a lot younger and better, fast.

Quarterbacks – Beck is the man. He may not have actually earned that, but that’s the way it is. He completed 56 per cent of his passes, but only managed one score in five games. Beck is clearly a couple years away from being a fantasy factor, if that happens at all.

Running Backs – There will be an urge to draft Darren McFadden, but Brown did succeed while healthy. Of course, Brown hasn’t hit 250 carries during any season in his career, including college. A back that doesn’t get you 250 carries won’t get you a title. It’s that simple.

Wide Outs – We expect the team to either bring in a free agent or use a later draft pick on a project. The trade of Chambers was somewhat bewildering, but maybe Ginn is good? Okay, probably not.

Tight Ends – We don’t envy the Dolphins’ brass as they try to rebuild this once-proud franchise. This position is amongst the many problem areas. David Martin and Justin Peelle combined for only 63 catches. In a season where tight ends were outstanding, Miami’s gang lacked punch. As the ’08 season looms, Martin and Peelle are better suited as backups; asking for production beyond that is foolish.

Defense/Special Teams – Before I get into Miami’s defense, why exactly did the Dolphins draft Ginn? He added zero impact to Miami’s offense or special teams. I’m glad Cam Cameron decided to heap this potential albatross on Miami instead of drafting a quarterback which it seriously needed. Hopefully for Miami’s sake, Ginn is not just another fast guy who landed in the NFL.

Meanwhile, the Dolphins’ defense is getting long in the tooth. Jason Taylor still has some gas in the tank after 11 sacks in ’07. However, he is Miami’s lone playmaker on defense. Joey Porter still was active but produced the second-lowest sack total of his career (5.5.). The secondary is average at best. In all, the Dolphins need to hit the draft and free agency hard on the defensive side of the football.

By Andy Goldstein
This entry was posted on Tuesday, February 5th, 2008 at 1:03 pm and is filed under Andy Goldstein, Derek Jones, FOOTBALL, Team report. You can follow any responses to this entry through the RSS 2.0 feed. You can skip to the end and leave a response. Pinging is currently not allowed.