Squeeze Play: And Your Little Dog Too! 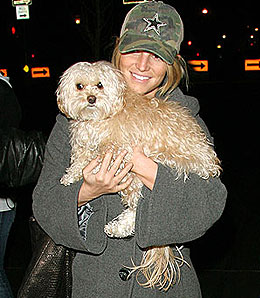 Okay, Jessica, we get it: the hat means you’re still riding your Cowboy. But what? No memorabilia for the mutt? (Turgeon/Rocke/Splash News Online)

The on-again, off-again saga that is Jessica Simpson and Tony Romo (and, of course, her refusal to allow him to dump her) is definitely on again. Last week, the pair was spotted at the Key Club in LA where Metal Skool Night was playing.

Jessica obviously must have done some schooling of Tony, because he was reportedly quite affectionate with her, wrapping his arm around her and resting his head on her shoulder. Do you, too, have a Paul Anka soundtrack playing in your head now?

The two even hopped on stage with the band at one point.

Take that, paparazzi! Jessica’s message was loud and clear: We are still a going concern. To drill that home even further, Jessica, and her little dog, too, arrived in New York early Wednesday morning and she (Jessica, not the dog) was wearing a camouflage Dallas Cowboys’ hat. No camouflaging her feelings there! But what? No Cowboys’ bandana for the mangy-looking Daisy?

The ill-fated relationship (is there any other kind, really?) between tennis star Andy Roddick and singer/actress Mandy Moore holds a special place for us Torontonians, as this affair began in our fair city.

In 2002, Moore was in town filming How to Deal when she met A-Rod, one year her senior and at the time surging his way up the rankings towards superstardom. It seemed like match made in heaven.

By the summer of 2003, she said she was very much in love, even if it was a “crazy, long-distance romance.” Mandy also found it a bit weird to sit in the stands with Andy’s parents and friends during his matches, listening to girls in the crowd swooning over him, offering him everything from homemade baked lasagna to their maidenhood. Clearly, Andy wasn’t at a loss to find someone to lug his balls around, so to speak.

Of course, as an up and coming celebrity, Moore had her share of admirers, too. In fact, the relationship garnered so much attention that it put a strain on Andy’s career.

However, love seemed to be in air in September 2003, when Roddick broke through and won the U.S. Open. And when he celebrated his one and only Grand Slam title, it was obviously Moore he was slamming at the time, as evidenced by his jumping into the stands to hug her after his win.

Roddick did his best to teach the tender-aged Moore how to handle a racquet properly, but it quickly became clear that despite her impressive 5’10” frame and athletic body, she wasn’t exactly a sport-o.

“We’ll hit balls when he practices, but I’m no good,” she said. “I’m not athletically inclined. Usually I get really frustrated with myself. I’m not even good at mini golf.”

Can’t you just see this awkward girl, self described as “like, the most uncoordinated person you’ll ever meet” trying to return his 150 mph serve? Like, her agent must have been cringing at the prospect of Mandy taking one of those off the noggin.

But Mandy did have a brush with sports growing up. “I actually tried to play basketball when I was younger in a girls and boys league and that was only because my parents promised me Penny Hardaway basketball shoes if I played.” Penny Hardaways? Oh jeez, how October 1997 can you get?

But to further cement her status as the queen of spaz, Mandy said: “I can’t even dance. I just don’t have the coordination.”

Have you ever heard that you can tell a lot about a person as a prospective lover based on their dancing ability? Small wonder this tryst was doomed to the direct-to-video bin.

Sure enough, in March 2004, Andy said game, set and match to his relationship with Mandy.

She said it was because he “doesn’t like Los Angeles very much and he doesn’t care about the industry.”

For his part, Andy said he terminated things because carrying on a long distance relationship was taking away from his tennis. Those close to him said he was fed up with her Hollywood life and how the paparrazi would hound them wherever they went. Dude, what do you expect? In case you hadn’t clued in, you’re pretty big news yourself.

At any rate, Mandy was so traumatized by their demise that she penned a whole disc worth of tracks about the breakup, a collection released last year. Pass the Kleenex!

Two years and change after the pair split, Andy, at the time linked to tennis superbabe Maria Sharapova, was spotted having lunch with Mandy. Apparently, she spent the entire meal eating him up with her eyes. That sure got the tongues a-wagging. Was A-Rod two-timing with Maria and Mandy? Talk about mixed doubles!

But rest assured, Andy and Mandy were “just friends,” despite her drool stains. That winter, she lent him a helping hand, so to speak, by adding some star power to his first annual Charity Celebrity Poker Tournament. Again, speculation of a reunion was sparked, but Andy quickly aced that talk, insisting the two were merely friends.

Since her grand slam with Andy, Mandy’s done dating athletes. Most recently, she was seen with Matthew Perry, 15 years her senior. Damn, she would have been in grade school when Friends first hit the air. Maybe dating a much younger lady will help Chandler stay sober. Hey, it can’t hurt.

By RotoRob
This entry was posted on Sunday, February 3rd, 2008 at 8:18 pm and is filed under RotoRob, Squeeze Play. You can follow any responses to this entry through the RSS 2.0 feed. You can skip to the end and leave a response. Pinging is currently not allowed.