Dear RotoRob: To Bibby or Not to Bibby? 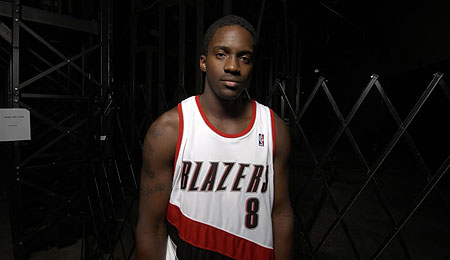 Martell Webster is tearing it up lately, especially from downtown. (Fredrick D. Joe)

Everything is good here; I’m just a bit disappointed about how my team has performed so far. I am currently No. 4 out of eight in our H2H League. Here is my team:

I recently dropped Ben Wallace for Bibby, and am considering picking him back up.

Bibby is going to be back here in a day or so, so I would keep him. I would look to drop or trade Salmons and pick up someone else to occupy your SF spot. Martell Webster is a possibility, as he has been hot lately. But, since your league is so small, I would want to see a list of the available SFs before telling you to grab him. In eight-team leagues, there can be some very good starters on the wire for no reason other than nobody has room for them.

I would like to ask for your advice on my team, where I’m dead last and trailing by almost 10 points in a Rotissiere league of 10 teams (nine-cat league, has O-Reb and D-Reb).

I have T.J. Ford and Gilbert Arenas (unfortunately, he was my first pick) who are both injured. Should I drop them considering that they might not be playing until the middle of February? My players include: Mo Williams, Sebastian Telfair, Mike Miller, Ricky Davis, Udonis Haslem, Travis Outlaw, Amare Stoudamire, Danny Granger, Michael Finley and Anthony Carter. What can be done to salvage my team from ending in last place?

When Arenas comes back he will be huge. But, Ford is dead weight and should be cut as soon as possible.

By James Morris
Tags: Mike Bibby
This entry was posted on Saturday, January 12th, 2008 at 8:38 pm and is filed under BASKETBALL, Dear RotoRob, James Morris. You can follow any responses to this entry through the RSS 2.0 feed. Both comments and pings are currently closed.