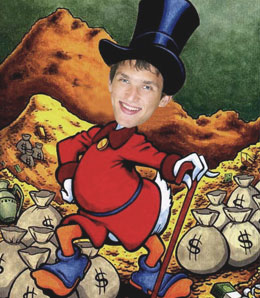 Alexander Ovechkin is rolling in the ducks, I mean bucks.

What’s the biggest news of the week? Is it Alexander Ovechkin’s newfound role as Scrooge McDuck in Capital Land (coming soon: my 14-year, $150 million contract with RotoRob, complete with no-trade clause and private jet)? Is it Steve Downie doing his best impersonation of the vile Million Dollar Man Ted Dibiase (with manager Bob Clarke playing Bobby “The Brain” Heenan distracting the referee, of course), thumbing Jason Blake in the eye?

No, the week’s top story should be on the ice, at least from a fantasy perspective, and there’s no one hotter than would-be Pittsburgh saviour Ty Conklin. If he’s available and you need a quick pick-me-up in the goaltending department, Conklin’s your guy. However, Conklin has shown signs of brilliance wherever he’s gone. His challenge is staying consistent, similar to the Alex Aulds of the world. One thing to consider: Marc-Andre Fleury’s got the dreaded high ankle sprain, which means his recovery can be on schedule or he can be out for twice as long.

For better or worse, Tampa Bay Lightning coach/snarkmaster John Tortorella has committed publicly to giving Karri Ramo his share at being The Man. Of course, for Tampa Bay to be any good, it really needs more than The Man between the pipes; it also needs The Brad Richards and The Defensemen Not Named Paul Ranger to play well.

Inspired by winning the Russell Crowe “Fightin’ Around The World” Award last week, Ray Emery decided to keep kicking ass and taking names, this time at practice with known bad dude Brian McGrattan. Emery and McGrattan, sitting in a rink, F-I-G-H-T-I-N-G. Okay, so this doesn’t have much of a fantasy aspect, but it is funny.

Just when Jaromir Jagr appeared to be happy, Best Friend Forever Martin Straka went down with a concussion. While Straka says he’ll be back early in the week, you’ll never know what sort of mood Jagr will be in that night, or who his other linemate will be. Before the injury, it was Scott Gomez, but at this rate, you could throw a dart at the Rangers’ roster and pick a guy. By the way, how the hell did Gomez make the All-Star team?

The Toronto Maple Leafs are desperate for anything right now, including giving rookie call-up Justin Pogge a shot. Vesa Toskala, however, has provided a measure of stability for Toronto considering the hideous defensive coverage he has in front of him, and calling up the former World Junior MVP won’t solve many problems.

Many fantasy observers are hailing the arrival of Erik “Don’t Call Me Jack” Johnson with his three-assist night against Columbus. While Johnson’s points-per-game ratio is pretty darn good (16 points in 29 games), especially for a rookie blueliner, it’s important to note that his points haven’t necessarily come consistently. A quick look at Johnson’s game log shows that he’s got two three-assist nights in December/January. If you factor those games out, he’s only got three points during that six-week span. Johnson may have breakout games, but he still needs time before he helps St. Louis forget about Chris Pronger.

Will Sergei Samsonov revive his career in Carolina? Consider this – during his best seasons, Carolina coach Peter Laviolette was behind the Bruins’ bench as an assistant. Hopefully, that means that Laviolette knows what makes the former first rounder tick. If you’re desperate for some forward help, look at Samsonov’s ice time for the first two games: 20:47 and 18:20.

By Mike Chen
Tags: Alex Ovechkin
This entry was posted on Saturday, January 12th, 2008 at 5:59 pm and is filed under HOCKEY, Ice Chips, Mike Chen. You can follow any responses to this entry through the RSS 2.0 feed. Both comments and pings are currently closed.