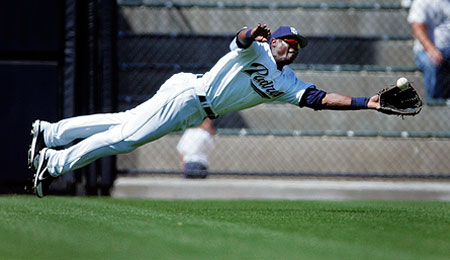 The Padres will be without Mike Cameron this season. (K.C. Alfred/Union-Tribune)

After struggling with outfield depth last year – especially down the stretch when injuries decimated their flyhawk ranks – the Padres have made a few moves this offseason to address this weakness.

Centrefielder Mike Cameron won’t be back; Milton Bradley left as a free agent and signed with Texas; and Terrmel Sledge has bolted for Japan. Jose Cruz Jr., another key reserve, was DFAed last August.

That leaves holdovers Brian Giles and Scott Hairston as the only other Padre outfielders (besides a cast of thousands, of course) who toiled on the club last year.

The acquisition of Jim Edmonds from St. Louis is the big prize for the outfield. But he’s 37, incredibly injury prone and has been in free fall offensively for a few seasons now. So if you’re seeking a sleeper, Hairston could be your man. Before the Pads landed Edmonds, there was talk that Hairston would be the club’s Opening Day centrefielder.

Minor league contracts to Chip Ambres and Jeff DaVanon helped add some depth. Ambres, who turned 28 last month, is coming off a fine season in which he hit .274 while scoring 80 and driving in 71 runs with 21 homers and 71 walks in 120 games. It was good enough to earn him his first big league action since 2005.

DaVanon, 34 last month, suffered through another injury-plagued season, which makes him the ideal understudy for Edmonds. Certainly his minor league numbers suggest he can still hit, but DaVanon struggled badly at the major league level – especially during his time in Arizona.

After batting just .251 last season – second worst in the NL – and falling just short in their bid to make it to the playoffs for a third straight season, the Padres have some work to do this year. Are these acquisitions – in addition to other moves they made, including the signing of Tad Iguchi, Randy Wolf and Mark Prior – enough to help the Padres get back to the postseason?

I have no doubt that this team will have the pitching to get it done, but I’m not as confident that the Padres have made the necessary adjustments to their attack to improve upon last year’s 89 wins. I wouldn’t be shocked if this team struggles to stay over .500 this season.

By RotoRob
This entry was posted on Tuesday, January 1st, 2008 at 7:04 pm and is filed under BASEBALL, RotoRob. You can follow any responses to this entry through the RSS 2.0 feed. You can leave a response, or trackback from your own site.