By MIKE CHEN and STEVEN OVADIA 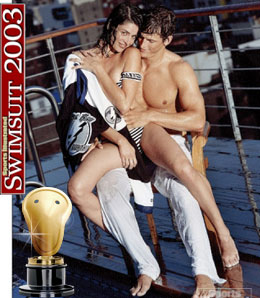 Vincent Lecavalier’s former fling with SI Swimsuit Issue babe Caroline Portelance qualifies him as our Stud of the Year. Oh, he’s pretty good on the ice, as well.

Steve’s Pick: Vincent Lecavalier — He’s leading the league in points and is well on his way to his second straight 50-plus goal season. The 1998 first overall pick was once defined by his reluctance to live up to his potential. Now he’s leading his team and the league.

Mike’s Pick: Lecavalier — Sure, Sidney Crosby got the glory on New Year’s Day, but for the calendar year of 2007, no one was better. Now if only Lecavalier could do something about his team’s goaltending. 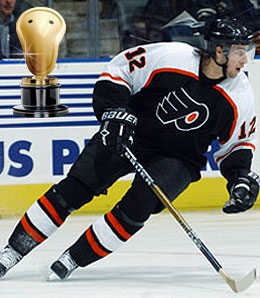 Concussion issues have limited Simon Gagne to 10 games this season.

Steve’s Pick: Simon Gagne — He put up 79 points in 2005-06 and 68 points in 2006-07. A concussion has kept him off the ice and limited him to just eight points in 10 games so far this season. A very disappointing season for a very talented player. Let’s hope he makes a full recovery.

Mike’s Pick: Tampa Bay Goaltending — You’ve got three All-Stars anchoring the forward lines, all you need to do is provide consistent above-average — not spectacular — goaltending. Marc Denis, give it a shot. Crash and burn? Dang; okay, how about Johan Holmqvist? Well, it looks like you can’t decide if you’re a Vezina winner or an AHL backup. Considering Tampa’s firepower, whoever manned the crease for the Bolts should have been a simple fantasy pick. However, scoring four goals a game doesn’t work if you let up five. 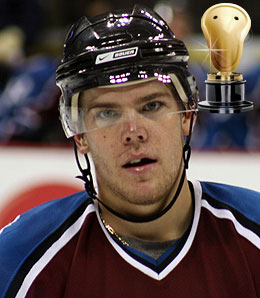 Paul Stastny’s had a huge second half in 2006-07 and has been even better this season.

Steve’s Pick: Jonathan Toews/Patrick Kane combo from Chicago — Toews leads all NHL rookies in goals. Kane leads all NHL rookies in assists. Between the two of them, that’s 68 points. Say what you will about Pittsburgh’s Evgeni Malkin, last season’s Calder winner, or Anaheim’s Dustin Penner, who put up 45 points last year in his rookie season, there’s just something nice about seeing young talent on the usually moribund Blackhawks.

Mike’s Pick: Paul Stastny — While Stastny started off slower than, say, Malkin, his run in the early months of 2007 showed that he could rival the Russian star in ability. He’s still pacing himself at over a point-per-game, and in the wacky system of “Calendar Year Awards Across Two Hockey Seasons,” Stastny was the probably the biggest and best rookie surprise for fantasy players. 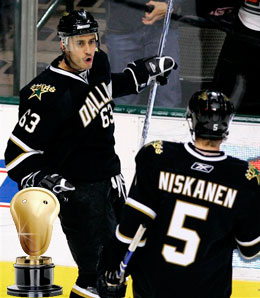 Mike Ribeiro has shocked us with his offensive numbers in Dallas. (AP Photo/Tony Gutierrez)

Steve’s Pick: Chris Osgood — Despite his two Stanley Cups with Detroit, Osgood has never commanded a lot of respect and his numbers have usually supported the notion that he’s an average goaltender. But this season, co-starting with Dominik Hasek, he’s putting up great numbers: a 1.70 goals against and .930 save percentage. These are easily the best numbers of his career, including the 1995-96 season, when he shared the Jennings Trophy with Mike Vernon.

Mike’s Pick: Mike Ribeiro — When Ribeiro was shipped to the defensive-oriented Dallas Stars, most people figured that his offensive game would be swallowed up faster than an outdoor rink evaporating in the Texas heat. Ribeiro bucked all the naysayers and wound up being the most creative and effective Stars’ forward since Mike Modano was in his heyday.

And now for a something a little different… 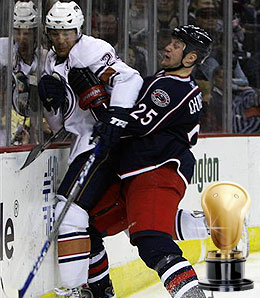 Steve Staios: You have to love Edmonton’s Steve Staios’ numbers over the past two seasons. Six goals. Seventeen assists. And a -15. Maybe it’s time for Steve to start spending a little more time in his own zone. Or scoring more goals. A lot more.

Philadelphia Flyers: Five players were suspended for questionable to awful hits. When the smoke cleared, the suspensions accounted for 52 games. They’re not a team so much as a skating street gang. 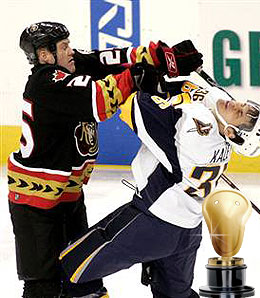 With over a thousand penalty minutes in six seasons, Chris Neil, left, is impressing us with his pugilistic ability. (Chris Wattie/Reuters)

Chris Neil: The Ottawa forward is in just his sixth NHL season, yet he already has over 1,000 penalty minutes. Obviously, in the new NHL, penalties are a lot easier to come by, but you still have to be impressed by Neil’s commitment to the penalty box. Word on the ice is that he has his own set of monogrammed towels in the Ottawa sin bin.

The Russell Crowe “Fightin’ Around The World” Award

Ray Emery: The Ottawa goalie is versatile. He can fight on the ice, fight off the ice, and even fight with his coach. And who can forget his classic bout against fellow goalie Marty Biron last season? Goalie fights should count for fantasy points. Bonus points for Emery’s gigantic can’t-wipe-this-off-my-face grin every time he fights. The First Rule of Fight Club is “You do not talk about Fight Club!” 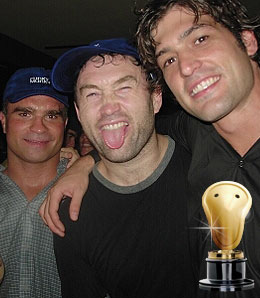 Hmm…which of these three do you want to hitch a ride with?

Ed Belfour’s drunken tirades are legendary. Now, he’s teaching a younger generation of player how to do up altercations the right way. Shortly after last season ended, Belfour took the veritable babe in the woods (although he’s 33, he’s 10 years’ Belfour’s junior) Ville Peltonen out for some post-season drinking at a Miami nightclub. Naturally, some disorderly conduct soon followed as the evening grew late, and the police were summoned to ask the two to leave. When the cop approached Belfour, as you might predict, the fiery goalie started scrapping with him, forcing the cop to taser him. Belfour was then put into a rescue vehicle to be treated for his injuries. A quick study, Peltonen tore a piece of the truck off while he smiled at the rescue workers. Way to carry on the tradition, kiddo! Eddie the Eagle has flown the coop to play in (read: terrorize) Sweden this year, but it’s good to know that he passed the torch before departing for a fresh start.

By Mike Chen
Tags: Marc Denis, Sidney Crosby, Simon Gagne, Tampa Bay Lightning, Vincent Lecavalier
This entry was posted on Wednesday, January 2nd, 2008 at 5:59 pm and is filed under HOCKEY, Mike Chen, RotoRob Awards, Steven Ovadia. You can follow any responses to this entry through the RSS 2.0 feed. Both comments and pings are currently closed.