By JAMES MORRIS and STEVE SIMON

And we’re off. The second annual RotoRob Awards kicks off with this year’s basketball honours. We’ve got the best, the worst and the wackiest presented here for your entertainment and edification. Stayed tuned over the next few days as we roll our our baseball, football and hockey awards.

Sure, Kobe Bryant averaged 40.4 PPG in the month of April, Shawn Marion registered insane across-the-board production, and Dirk Nowitzki walked away with the MVP. Yet, the best player to emerge in 2007 has been Chris Paul. Thus far in the 2007-2008 campaign, Paul is distancing himself from everyone else with a line of 21.7 PPG, 49 FG%, 90 FT%, 10.0 APG, 2.9 SPG and 1.3 3PMG. If he goes on to average 10 assists and three steals per game this season, he’d be the youngest in the history of the NBA to do so and that’s pretty remarkable. Paul, the 2006 RotoRob NBA Rookie of the Year, has graduated to the big time, people.

Yet there is one man, and one man only that deserves this award – Andrei Kirilenko. Not only because his post-all star stats in 2006-2007 had him averaging a measly 7.0 PPG, 3.8 RPG and 1.9 APG, but his name was engraved on this trophy the second after he was posterized by Baron Davis on May 11. This dunk actually became a commercial for the NBA.

Of course, AK-47 didn’t help matters when he cried in front of the media. 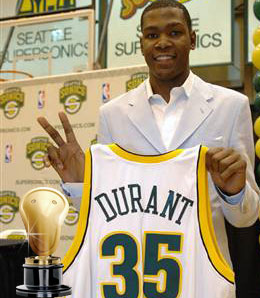 Kevin Durant’s scoring exploits earn him our nod as ROY.

The reigning rookie of the year, Brandon Roy, deserves some mention in this category. Earlier this year, Roy received 127 out of a possible 128 first-place votes. He also averaged 19 PPG, while nearly adding five rebounds and five assists per game after the all-star break last season. Roy, however, has since been surpassed as a fantasy player by third-place finisher, Rudy Gay. The winner of this award goes to the 2007-2008 likely rookie of the year, Kevin Durant. Already better as a fantasy player than Roy is across the board, Durant is slowly raising his field goal percentage above 40 per cent and is averaging 20.0 PPG. Remember folks, LeBron James shot only 41.7 per cent from the floor during his rookie year. Since 1990, only eight rookies have averaged 20 points or more per contest, and Durant is not that far off from Allen Iverson’s 23.5 PPG in 1996-1997. Durant is going to be very special. 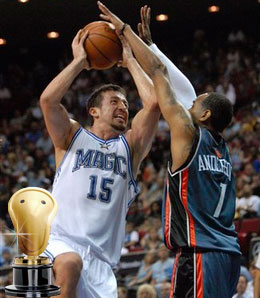 The popular pick here would be Grant Hill. But, did you know that Hedo Turkoglu is averaging over six more points per game, almost one more assist, and over two more rebounds per game than he did last season? No? Most people were not aware of it either! Furthermore, the Dirty Turk is getting close to seven more minutes each game. Hedo is doing all he can do to be the perfect compliment to Dwight Howard in Orlando and his fantasy owners are loving him for it. Turkoglu finally appears to be over the mysterious ailment that has come and gone for the past two years, and he’s taking his game to the next level as a result. So remember, when you are in the office and people start throwing around Hill as the Comeback Player of the Year, just do what I do and throw some Turkoglu on them!

He’s Got Game (Off of the Court) 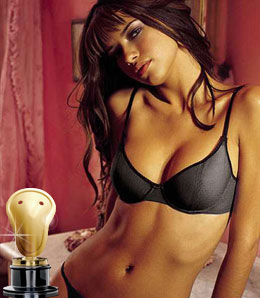 Porking this hottie has even allowed Marko Jaric to start dunking.

Obviously a fan of the Don Johnson five-o’clock shadow, Victoria Secret model Adriana Lima has been dating Marko Jaric of the Minnesota Timberwolves. “Ever since he started dating Adriana Lima, he’s a new man,” Mark Madsen said. “He’s flying all over the court. He dunked! I’ve never seen him dunk.” Basketball fans finally have a reason to watch the Timberwolves, or at the very least comb the stands for Ms. Lima. Could she replace Eva Longoria as the hottie in the stands to focus on for the networks (that is, if Minnesota ever gets good enough to actually be TV-worthy again)? 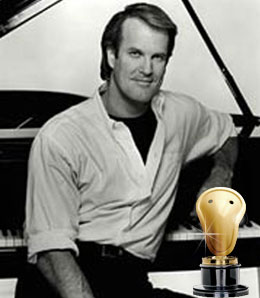 The NBA without John Tesh’s theme music is like raisinbread without the raisins. Or something like that.

Wikipidea, which of course, must be taken with a grain of salt, states that the purpose of television theme music is “to establish a mood for the show and to provide an audible cue that a particular show is beginning.” No theme song did that quite like Roundball Rock, John Tesh’s masterpiece, when all was right with the world and the NBA was on NBC. Clearly something is missing from basketball coverage on ABC, ESPN and TNT, and one must look no further than their theme songs over the last few years: Can’t Get Enough by Justin Timberlake, Let’s Get It Started by the Black Eyed Peas, Lose My Breath by Destiny’s Child, This Is How A Heart Breaks by Rob Thomas and Runnin’ Down a Dream by Tom Petty and the Heartbreakers. Television executives want tender and I want The Blonde Frankenstein’s jingle. In 2008, we may have a compromise.

Quote of the Year Award 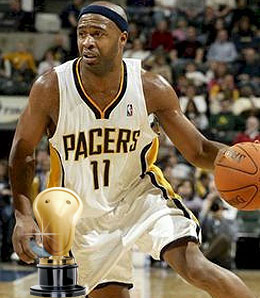 Runner-up Zach Randolph, when asked how he felt about being removed from the starting lineup, replied, “I don’t plan on coming off no bench for the rest of the season.”

However, Jamaal Tinsley would not be denied in this category. In his latest in a string of late-night incidents, Tinsley and his friends were being harassed by a group of men pestering him about his flashy vehicle and exorbitant paycheck. When asked what he needs to do differently to avoid trouble, Tinsley replied, “I just got to do things more smarter.” Indeed you, do, Jamaal. Indeed you do. 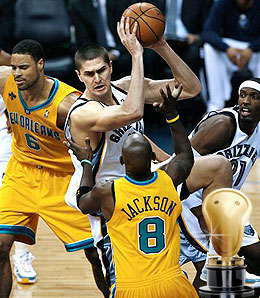 5. What’s the best way to go about showing your team you are worthy of a multiyear deal? Andray Blatche naturally did what most would do, such as getting arrested after he tried to solicit some extracurricular activity from a female police officer in the prostitution enforcement unit. Um, how much just for a slam dunk, hoe? Hopefully, Blatche didn’t try to superman dat hoe.

4. Darko Millicic, finally showing he has a pulse, blaming the referees for Serbia’s loss to Greece in Eurobasket 2007. Lock up your daughters, people!

3. With everything that happened with Isiah Thomas in 2007, nothing was more disturbing and upsetting than this video. Just think, if he keeps piling up the charges, soon he won’t be doing this kind of crap on a voluntary basis anymore — it will be part of his community service sentence.

2. A criminal complaint alleged a ruckus outside of a nightclub. Can you describe the ruckus, sir? Sure, after parking illegally without pay and having his car towed as a result, Rafer Alston went after a parking attendant and grabbed his arm, shook him and then spat on him. Obviously not sufficient, Alston returned and allegedly slashed the attendant’s neck. I was under the impression that Alston was such a caring individual.

1. One man managed to cast a shadow over a whole sport once again. Baseball has Barry Bonds, Football has Michael Vick, and Basketball has Tim Donaghy. What’s worse is that, when he is sentenced on January 25, 2008, Donaghy faces some serious jail time for betting on games. I wonder, does he knows the cigarette-to-dollar ratio in prison? Do you think he’ll be asked to officiate those friendly pen pickup games in the courtyard? 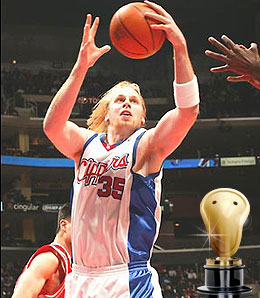 Chris Kaman takes the cake as the most improved player. (John W. McDonough/SI)

Chris Kaman gets the nod here, but this was actually somewhat close between Kaman and Rudy Gay. But, alas, Kaman pulls it out when you total the numbers up. Plus, Kaman has the Jesus lettuce on top of his head! He is really helping his fantasy owners out with his increase of 6.2 rebounds per game, 8.5 points per game, and although we don’t count the stat, 10.2 more minutes per game sure does help. Kaman is no longer merely a scary looking mountain man who you’d be afraid to venture down an alley with. I mean, he’s still that, but now he’s a damn fine hoops player, too.

Now we all know how bad the Timberwolves are, but it is the Miami Heat that takes this title so far. Dwyane Wade isn’t enough to make Shaq look good once again. The Heat won the division crown last season, but it has only managed to win eight out of its first 30 games this season. Face it, fans, Shaq is a shell of his former self. 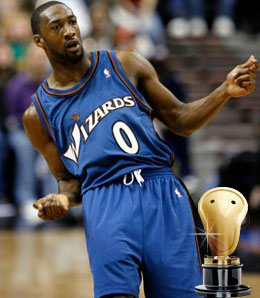 When Gilbert Arenas went down, so did many fantasy owners’ chances.

Major injuries to Gilbert Arenas and Elton Brand have been a two-pronged attack on fantasy owners. Brand was hurt before the season even began, so you knew going into the draft that taking him was a major risk from the get-go. Agent Zero, on the other hand, just all of the sudden went lame and left his fantasy owners wondering what could have been with that first rounder they burned on him. Both should return at some point this season, but Arenas owners are falling behind in leagues and Brand owners are wasting a roster spot on a guy that will be maybe be 75 per cent at the end of the season.

Worst Person to Invite to a Gay Pride Parade 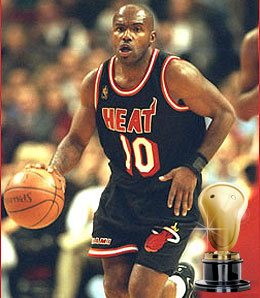 Is it just me or does homophobic Tim Hardaway look ready to receive here?

Tim Hardaway’s rant was among the most disturbing outburts of the year, never mind simply sport. Imagine going on record with these gems: “You know, I hate gay people, so I let it be known, I don’t like gay people and I don’t like to be around gay people. I am homophobic. I don’t like it. It shouldn’t be in the world or in the United States.” I was just waiting for the reporter to say “No Tim, tell us what you really think about gay people.” I am pretty sure that wouldn’t go over well as the opening speech at the festivities. Well, you’ve got to admire his honesty, if nothing else.

Ah yes, you’ve got to love a man’s man like Zach Randolph. Already a finalist for the quote of the year (see above), Z-Bo made headlines when he was spotted at a strip joint last season. Nothing out of the ordinary there, right? Well, the thing is he was supposed to be on bereavement leave at the time. Then again, nothing brings me out of mourning more than a pair of augmented breasts in my face! Maybe Pacman Jones was there too, and he helped cheer up Randolph by “making it rain.”

Can You Take a Hint Award

Guard David Wesley, reduced to bench fodder on the Cavs last season, knew his days were about over when he couldn’t gain access to the Quicken Loans Arena weight room. Protected by fingerprint scanners, the room was inaccessible by Wesley several times as his prints weren’t registering any more. Uh yeah, dude. It’s time to be set adrift on an ice floe. Since then, of course, Wesley has been dealt twice in moves that were strictly salary-motivated and, for all intents and purposes, his NBA career is over. Of course, we could have told him that a long time ago.

Well, for sheer insanity, no one can top Anderson Varejao’s ‘do, of course, but how about Suns’ fans and their fixation with Steve Nash’s different looks over the year. It’s such a hot topic that it inspired this gem from the Arizona Republic.

By Steve Simon
Tags: Kobe Bryant
This entry was posted on Monday, December 31st, 2007 at 4:24 pm and is filed under BASKETBALL, James Morris, RotoRob Awards, Steve Simon. You can follow any responses to this entry through the RSS 2.0 feed. Both comments and pings are currently closed.