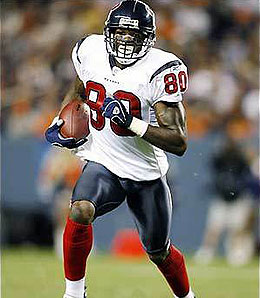 If Andre Johnson hadn’t been hampered by knee woes for a good chunk of the season, he’d be among the league leaders in most receiving categories.

We’re just listing players this week; no witty banter for the final week of the season. Hope you all had a successful fantasy football season, and if you did, feel free to donate copious amounts of cash to the RotoRob.com team.

By Derek Jones
Tags: Wide Receiver Rankings
This entry was posted on Friday, December 28th, 2007 at 3:05 pm and is filed under Cheat sheets, Derek Jones, FOOTBALL. You can follow any responses to this entry through the RSS 2.0 feed. Both comments and pings are currently closed.