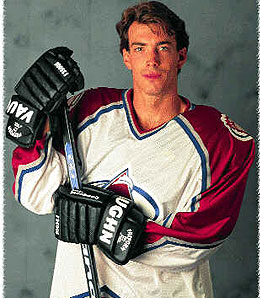 Colorado is rolling, but will be without Joe Sakic for up to three months.

It’s more of the same in Colorado as the Avs have had to make do without captain Joe Sakic for a little while now. Well, things won’t change anytime soon as Sakic will undergo hernia surgery and will be out two-to-three months. Who will step up? Don’t be surprised if rookie T.J. Hensick gets a shot at the lineup.

Everybody loves Ray Emery? Well, maybe not the equipment guy who had to clean up Emery’s Incredible Hulk-ish hissy fit at practice (oh water bottles, we hardly knew you). The consequences of this? Look for Martin Gerber, who’d been getting the bulk of the ice time, to maintain his stranglehold on the starter position.

As predicted, young Kari Ramo is getting a shot to fill the Lightning crease. That means that Marc Denis hits the waiver wire. What does this all mean? Look for Ramo to split the duties with Johan Holmqvist until one of them can somehow maintain some consistency, and look for Denis to rip up your AHL fantasy league.

Speaking of Tampa Bay, Vincent Lecavalier’s still getting some points, but Brad Richards continues to struggle with just five points in his last nine games. Similarly, Paul Ranger, who really filled the void when Dan Boyle went down with a freak accident, only has three points in all of December after a hot start to the season.

Alex Auld’s hot start has predictably tapered off with just one win in his last four starts. Now that Tim Thomas is back from injury, look for Auld to settle more into a back-up role in Boston.

So much for hot starts — after making the world forget about Jonathan Cheechoo with a torrid goal-scoring pace on Joe Thornton’s wing, rookie Devin Setoguchi has been sent down to the minors. Setoguchi’s past few weeks cooled off any talks of a Calder candidacy, and for now, San Jose coach Ron Wilson has put Cheechoo back as Thornton’s trigger man.

The Scott Niedermayer effect: a 4-0-1 record and only one power play goal allowed in five games. However, while the Ducks’ defense improved (five goals allowed in five games), the team’s scoring punch hasn’t changed. Also, the sacrificial lamb known as Andy McDonald is finding a home in St. Louis; while he slumped in Anaheim without his sauna buddy Teemu Selanne, McDonald is a point-per-game dude so far in St. Louis.

The only consistent thing going for the New York Islanders so far has been goalie Rick Dipietro; while he’s out nursing a knee injury, it’s up to Wade Dubielewicz to help the Ted Nolan’s team as they struggle with goal-scoring consistency.

By Mike Chen
Tags: Colorado Avalanche, Joe Sakic
This entry was posted on Saturday, December 29th, 2007 at 2:09 pm and is filed under HOCKEY, Ice Chips, Mike Chen. You can follow any responses to this entry through the RSS 2.0 feed. Both comments and pings are currently closed.