Dear RotoRob: Should I Shoot For J.R.? 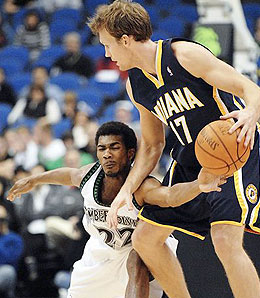 Believe it or not, Corey Brewer, left, is the same height as Mike Dunleavy. (AP Photo/Tom Olmscheid)

I have a fantasy basketball question for you. I am in a 10-team, eight-category rotisserie keeper league with 15-man rosters. We start nine players daily. My question is if I should drop Corey Brewer for J.R. Smith as I am wondering who will be the more valuable player in a keeper league? Also, who helps me the most in the stat areas that I am struggling in?

Here is my current roster:

Here are my current standings in the league (fifth place):

I’d easily give Brewer the long-term edge over Smith. Smith can’t seem to find his way into the Nuggets’ lineup and looks to be dead weight.

Anderson Varejao is a better bet than Villaneuva. Outside of that, I think you have a pretty good keeper team. I mean I like Ike Diogu more than Daniels, but being a writer for the Pacers too, I see Diogu as their sixth man and Daniels going back to being a 10-to-15 minute guy. I’d say you are weak at PF depth, but Okafor is really a PF with Oden hopefully taking over your C spot for years to come.

But, the first sign that I see Oden’s micro-fracture not healing right, I’d see if I can deal him before his value goes to nil.

By James Morris
This entry was posted on Friday, December 28th, 2007 at 1:09 pm and is filed under BASKETBALL, Dear RotoRob, James Morris. You can follow any responses to this entry through the RSS 2.0 feed. You can leave a response, or trackback from your own site.