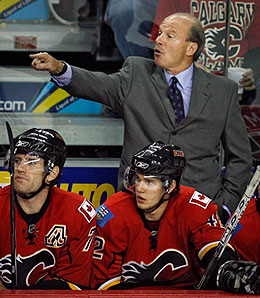 Coach Mike Keenan has the Flames playing brilliantly now — especially on the road.

The Calgary Flames, perhaps the hottest team in the league with points in 11 straight games, are heading into Vancouver tonight for a pivotal Northwest Division tilt.

Should they be worried?

Not a chance – they’re on the road, where the Flames feel most comfortable, it appears.

With only seven wins in 20 home games, Calgary is just a .500 team at home, but it has been blazing away at a record pace on the road these days. The Flames recently completed a six-for-six road trip, equaling an NHL record originally set by the 1971-72 Boston Bruins and then matched by the Flyers in ’82-83 and in 2001-02 by Detroit.

At four games over .500, Calgary is still behind last year’s 96-point pace, but this current hot streak has vaulted the Flames back into a playoff spot, currently tied for seventh in the Western Conference. They are just a point behind the third place Wild (who holds a game in hand) in the division and only three back of tonight’s opponent, the Canucks, who are currently tied for the division lead.

Needless to say, this is a big one for both teams.

Coach Mike Keenan, who recently celebrated his 600th career win, has this team playing superb hockey away from the Saddledome. And while his hiring raised many an eyebrow, including mine , Keenan now is closing in on Bryan Murray (613 wins) for fifth place all-time. By season’s end, only Scotty Bowman (1,244), Al Arbour (782), Dick Irvin (692) and Pat Quinn (657) will own more coaching victories than Iron Mike.

Jerome Iginla is enjoying a career year. He’s third in league scoring and has fired 11 goals in 11 games this month despite doing nothing in either of the past two contests. His linemate, Kristian Huselius, has also been shut out for the past two games, but he’s still got six goals and 10 assists in 11 December games. Huselius is headed for his second straight 30+ goal season, and he should set a new personal best in points this year.

The third member of this superb line, Daymond Langkow, has failed to record a point in three straight games, yet is still averaging a point per game in December. He hasn’t quite been as good as last year, yet Langkow is still headed for a second straight season of over 30 goals.

On defense, Dion Phanuef has averaged better than a point per game this month, and he should shatter his career high in assists and points this season.

Calgary’s powerplay, moribund to begin the year, excelled on the road trip, clicking along at 30 per cent. The penalty killing, however, remains weak.

In between the pipes, Miikka Kiprusoff is turning things around with a 2.41 GAA and .915 save percentage this month. I’m concerned about the load he’s carrying, but right now he’s showing no signs that it’s getting to him. Later on in the season, this workload may begin to wear on Kipper.

By RotoRob
This entry was posted on Thursday, December 27th, 2007 at 10:04 pm and is filed under HOCKEY, RotoRob, Team report. You can follow any responses to this entry through the RSS 2.0 feed. You can leave a response, or trackback from your own site.