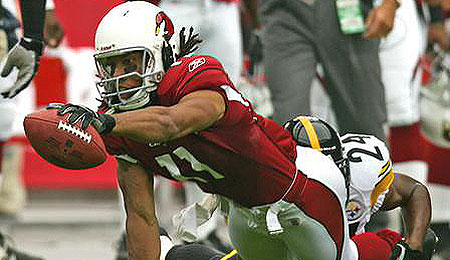 Larry Fitzgerald is battling injuries, but should still put up big numbers against the Saints this weekend.

2. Terrell Owens vs. Philadelphia– He humiliated the Eagles on national TV in November. He’ll have plenty of popcorn ready for Sunday.

4. Braylon Edwards vs. Buffalo– Edwards should find plenty of success against an ordinariy Bills’ secondary.

6. Marques Colston vs. Arizona-Colston at home is a safe option against the up and down Cards.

8. Chad Johnson at San Francisco– Johnson can finally redeem his disappointing season with some big performances during fantasy playoff time.

10. Hines Ward vs. Jacksonville– Marcus Stroud’s injury may focus Pittsburgh’s game plan to the ground, but Ward should still be a factor.

11. T.J. Houshmandzadeh at San Francisco– Since Johnson’s production has improved, it has caused a slip in numbers for T.J.

13. Lee Evans at Cleveland– Bombs away for Evans versus Cleveland’s less than stellar defense.

14. Torry Holt vs. Green Bay– Brock Berlin may drag down Holt’s production, but he may succeed in garbage time.

16. Plaxico Burress vs. Washington– Burress, whose toughness has been questioned throughout his career, continues to show grit while playing through an ankle injury.

17. Patrick Crayton vs. Philadelphia– The Eagles’ defense will focus on Owens a great deal after the show he put on in November. Crayton and Jason Witten will likely reap the benefits.

20. Kevin Curtis at Dallas– Curtis is another guy who hasn’t scored lately, dating back to Week Six. The once powerful Eagles’ passing game looks boring and predictable. Could you imagine if Owens ever played for the Eagles…oh, that’s right.

The Best of the Rest

By Derek Jones
Tags: Wide Receiver Rankings
This entry was posted on Friday, December 14th, 2007 at 6:54 pm and is filed under Cheat sheets, Derek Jones, FOOTBALL. You can follow any responses to this entry through the RSS 2.0 feed. Both comments and pings are currently closed.