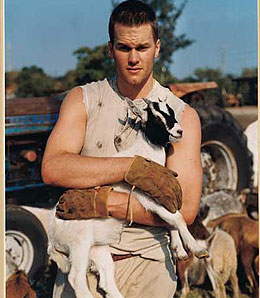 Tom Brady plans to do to the Jets this weekend what he did to this goat — except this time, he won’t be wearing kid gloves.

Most of you are still alive in your playoffs, mainly because you’ve been listening to me all season. Don’t worry. I know you are all exceedingly thankful to me. Some of us lost our playoff games last week because Jason Witten turned into the greatest tight end of all time. And no, I’m not bitter about it. Okay, maybe I am a little bitter. Jason freaking Witten! I lost in the playoffs because of a tight end! I quit forever! Argh.

1. Tom Brady vs. Jets – Much has been made of the Patriots’ desire to destroy the Jets. If New York doesn’t compete, it could be an historic loss. I really don’t need to tell you what to do with Brady.

2. Tony Romo vs. Eagles – I can’t really blame Romo for Witten’s big day. The Lions sold out to stop Terrell Owens and took their chances with the tight end. It backfired in the second half, but it’s nice to know that Romo can have a huge game without Owens being involved.

3. Drew Brees vs. Cardinals – Since Week Eight, only Brady and Romo have been as consistent for fantasy purposes. The Cardinals have improved against the pass, but they are still very beatable. Combine that with the fact that the Cardinals’ offense will easily put points on the board against a porous Saints’ defense, and this game has all the hallmarks of a shootout.

4. Peyton Manning @ Raiders – Surprisingly, Manning has actually gotten better as Marvin Harrison has missed games. Anthony Gonzalez has stepped up and played well for the last two weeks. My only worry is that the Raiders actually respect Gonzalez this week. Manning might have to go back to Dallas Clark more this week.

5. Carson Palmer @ 49ers – The weather last week pretty much put the kibosh on Palmer and the Bengals’ passing game, which means that there may not be a ton of Palmer owners left in the playoffs. But, for those that are, this stands to be a pretty good game. If the 49ers are able to score with any consistency, Palmer will have one of his three-score days. And Chad Johnson will do something absurd. I can’t wait.

6. Brett Favre @ Rams – Other than a little blip in Week 13, Favre is putting together an incredible season. In fact, I’m totally expecting Favre to have a role in some movie. Since there’s a writer’s strike, maybe we’d be better off having him compete in a reality television show. He and Ryan Grant could survive on the moon or something. Moon Survivor. That’s a good idea.

7. Matt Hasselbeck @ Panthers – The cast of characters receiving passes from Hasselbeck right now is somewhat laughable. That Hasselbeck is still humming along is absolutely remarkable. There’s no reason to believe his numbers will decline against an overmatched Panthers’ defense. Now, about that writer’s strike. I’m a writer, so maybe I should go over and support my bretheren. I mean, who wouldn’t love my support?

8. Derek Anderson vs. Bills – I think the most entertaining storyline in the NFL, after the Patriots/Jets feud this weekend, will be how the Browns handle the Anderson/Brady Quinn debacle. And don’t for a second think it’s anything other than a debacle. If Anderson does get the Browns to the playoffs, it will be very hard for the team to just delegate him to a back-up role. If he wins a playoff game, the team might as well trade Quinn while he has some value.

9. Kurt Warner @ Saints – If interceptions really hurt in your scoring system, Warner has been extremely erratic for you. If the turnovers don’t hurt quite as much, then he has been one of the better quarterbacks lately. So judge him based on that. He’s certainly startable, but there will be better options.

10. Jay Cutler @ Texans – For some reason, I would be absolutely terrified to start Cutler in a fantasy playoff game. That being said, three out of his last four games have been quality starts. He could very well go off for 250 yards and a couple scores. Just don’t blame me if he pulls out a dud.

11. Ben Roethlisberger vs. Jaguars – If Roethlisberger were on a team like, say, the Bengals or Saints, he would be a top five fantasy quarterback. Unfortunately for his fantasy owners, the Steelers tend to play lower scoring games, which means subdued passing numbers. Still, if the game is close the whole way through, Roethlisberger stands to have a good day.

12. Philip Rivers vs. Lions – Rivers has been pretty terrible this season, he’s battling a leg injury, and the Chargers have been a shell of what they were last season. That all said, Rivers is facing the Lions, which automatically makes him at least a consideration for a start. It will take quite a bit of intestinal fortitude, but it could pay off.

13. Vince Young @ Chiefs – Well, likely no Young owner is still playing in the playoffs, but he actually has a good matchup this week. That’s probably more of an insult to fantasy owners who got burned by Young’s terrible game, but at least you can actually get stuff done on Sunday now. Yay.

14. David Garrard @ Steelers – Well, crap. My favourite player from 2007 has the worst matchup ever this week. The Steelers’ defense is very good and very mad. They will be treating this as a must-win game, which means Garrard will not produce much. Rats.

15. Jon Kitna @ Chargers – Kitna has somehow transformed into something of a boring quarterback. He hasn’t had a great game since Week nine, which means he’s not at all worth starting.

By Andy Goldstein
This entry was posted on Thursday, December 13th, 2007 at 6:37 pm and is filed under Andy Goldstein, Cheat sheets, FOOTBALL. You can follow any responses to this entry through the RSS 2.0 feed. You can leave a response, or trackback from your own site.