Carolina on my Mind 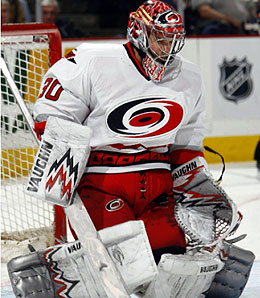 If you’re seeking the root of Carolina’s issues, don’t point a finger at Cam Ward.

Last year was a complete disaster for the Carolina Hurricanes.

At six games over .500, it wasn’t that they sucked horribly, but a season after winning the Stanley Cup, last season’s 88-point effort wasn’t even good enough for a return trip to the playoffs, never mind a chance to defend their title.

And despite recent struggles to an extent, which included a 5-2 loss to Detroit Sunday, the Hurricanes are showing modest improvements this season with a 16-12-3 record. It’s not an intimidating mark by any stretch, but in the weak Southeast Division, the team’s 35 points is good enough for a six-point bulge over the Thrashers, although Atlanta does have a pair of games in hand.

By virtue of its division lead, Carolina holds down the No. 3 seed in the East currently, but with a tough game against a rejuvenated Senator squad on tap Wednesday, that division lead is looking a bit precarious these days.

Scoring has definitely not been an issue with this team, as the Canes currently rank second in goals scored, thanks in large part to the fact they are generating plenty of shots (also second in the league in per game average).

However, as easy as goals have been to come by, stopping them has proved extremely tough for Carolina this season. The team is tied for 27th in goals against and is an appalling second worst in save percentage.

By RotoRob
This entry was posted on Monday, December 10th, 2007 at 3:12 pm and is filed under HOCKEY, RotoRob, Team report. You can follow any responses to this entry through the RSS 2.0 feed. You can leave a response, or trackback from your own site.