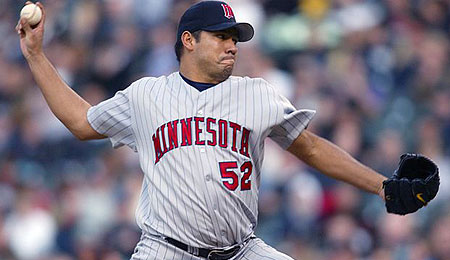 Yesterday, we started our free agent discussion with the first half of the American League. Today, let’s look at the rest of the Junior Circuit.

Bartolo Colon: He’ll likely have to settle for a one-year deal and prove he’s healthy. Possible takers include Oakland, the Mets (although that’s a long shot) and the Cardinals (who have a good history in helping revitalize these types of pitchers, Mark Mulder notwithstanding). One thing is certain: don’t expect the Halos to re-sign the oversized Colon, who served up too many gopher balls in the rare times he was able to actually pitch last season.

Carlos Silva: Of Seattle, the Dodgers, KC and Arizona, whichever teams don’t land Hiroki Kurado will likely make a play for Silva. He’s looking for four years for $40 million, so that will probably eliminate the Royals, unless he lowers that price. Silva did a great job keeping the ball in the park last year, leading to a nice rebound after his horrible 2006 campaign.

Roger Clemens: Could this finally be the end of the line for the Rocket, expected to work in a suit for the

By RotoRob
This entry was posted on Sunday, December 9th, 2007 at 5:14 pm and is filed under BASEBALL, RotoRob, Rumours. You can follow any responses to this entry through the RSS 2.0 feed. You can leave a response, or trackback from your own site.