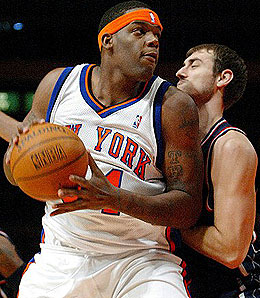 Eddy Curry wasn’t exactly the ideal centre given his rebounding deficiencies, but the since he’s left Chicago, the Bulls haven’t been able to find anyone who can score down low.

It’s a problem that has plagued the Chicago Bulls for a few seasons now, and one that they failed to address this offseason – the need for a solid low-post scoring presence.

Eddy Curry, dealt away three years ago, was the last Bulls’ centre capable of generating offense down low. And although he was injury prone and had a troubling heart condition (figuratively and literally) when the Bulls decided to part ways with him, he did manage 16.1 PPG in his final season with Chicago.

Ben Wallace, never known for his offense to begin with, has been downright invisible on the scoreboard this year with 5.1 PPG. Sadly, that leads all Bulls’ centres. Yes, I know that’s not why he gets the big bucks, but Wallace’s rebounds, blocks and assists are also down significantly this year.

Back in 2005-06, Tyson Chandler led the way for Chicago centres with a whopping 5.3 PPG. Of course, since leaving the Bulls and landing on the Hornets, Chandler has really begun to develop his offensive game.

Curry, for his part, couldn’t hold a candle to either Chandler or Wallace as a rebounder, so it’s not as if he was the yardstick against which Bulls’ big men should be measured.

Prior to Curry, the Bulls still couldn’t find anyone to score in the middle. Bill Cartwright had a couple of decent seasons while Stacey King supplied some offense off the bench in the late ’80s and early ’90s for Chicago. King’s role was then taken by Canadian Bill Wennington, who was even less gifted as a scorer. Luc Longley, in his final season as a Bull, managed to put up a decent year with 11.4 PPG, but the rest of his stay in the Windy City was fairly unremarkable. Of course, back then, with Michael Jordan and Scottie Pippen on board, it really didn’t matter, did it?

The team’s first round pick this offseason, Joakim Noah, is a fantastic energy player, but I don’t see him ever developing into a scoring threat.

It’s pretty sad when David Harrison, who plays all of 14.5 MPG, is a more dangerous scoring threat than your current top centre.

Remind me again why the Bulls are scraping close to the basement in the Eastern Conference? I mean, this club would be fine if the people who were being paid to score were scoring, but with the worst offense in the NBA – and no help coming from down low – it’s a small wonder why the Bulls are struggling along at 6-12.

By RotoRob
This entry was posted on Monday, December 10th, 2007 at 6:42 pm and is filed under BASKETBALL, RotoRob, Team report. You can follow any responses to this entry through the RSS 2.0 feed. You can leave a response, or trackback from your own site.