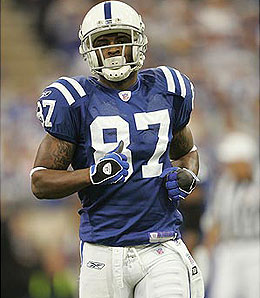 Is there any doubt that Reggie Wayne is now the top receiving option in Indy, with or without Marvin Harrison around?

1. Terrell Owens at Detroit– Owens is locked in right now, so don’t expect a reeling Lions’ team to slow him down.

2. Randy Moss vs. Pittsburgh– Well, it looks like the Pats have been figured out to a degree. Considering how physical the Steelers like to play, Moss having another substandard game is not out of the question.

3. Braylon Edwards at NY Jets– Poor Cleveland. After defeating the Jets on a questionable call last season, the Browns lose the same way last week in Arizona. The Jets play hard, but Edwards will be effective yet again.

4. Reggie Wayne at Baltimore– It’ll be interesting to see the mental capacity of the Ravens after last week’s debacle. They gave the Colts problems in the playoffs last season. However, Wayne has solidified himself as Indy’s number one option even if Marvin Harrison comes back down the road.

5. Greg Jennings vs. Oakland– He’s quietly putting together a nice season thanks to SI’s 2007 Sportsman of the Year.

6. Chad Johnson vs. St. Louis– I’m not sure Johnson will ever reach the elite status of a Moss or Owens.

7. Joey Galloway at Houston– He’s the most annoying fantasy football player in years. He’ll shake free in the Texans’ secondary.

8. T.J. Houshmandzadeh vs. St. Louis– Look for the Bengals to put the Rams in chase considering their shaky quarterback situation.

9. Marques Colston at Atlanta– Colston and the Saints have come out of their offensive coma. It should continue against the Falcons.

10.Torry Holt at Cincinnati– I didn’t like Brock Berlin as Miami’s quarterback when he played for my beloved Hurricanes. I can’t imagine liking him at quarterback for the Rams — against anyone.

11.Bobby Engram vs. Arizona– Engram’s career has been revived by his hard work and the Seahawks’ revolving door at wide receiver.

12.Donald Driver vs. Oakland– If you were one of the five people that has the NFL Network, you may have noticed that Driver wasn’t a major factor against Dallas. That should change this week.

13. Larry Fitzgerald at Seattle– A groin injury may slow him down, but without Anquan Boldin again potentially, Fitzgerald will be the definite go-to guy.

14.Andre Johnson vs. Tampa Bay– Can you believe the Texans’ offense is actually watchable this season? Shocking. Well, that may change against Tampa’s defense.

15.Calvin Johnson vs. Dallas– No Roy Williams = more opportunities for Johnson to prove his worth.

16. Hines Ward at New England– New England’s secondary looked vulnerable against A.J. Feeley and Kyle Boller. Something tells me that Ben Roethlisberger will figure out a way to take advantage.

17. Wes Welker vs. Pittsburgh– After an egregious defensive performance by Philadelphia, the Ravens finally dealt with Welker appropriately — by being physical. Expect more of the same from the Steelers.

18. Patrick Crayton at Detroit– He’s been banged up lately, but with Mr. Jessica Simpson throwing him the ball, he’ll get into the endzone.

20. Deion Branch vs. Arizona– So, if Branch played on New England right now he’d probably be the fourth receiver. The Seahawks endulged a bit too much to pick him up given his production so far.

21. Derrick Mason vs. Indianapolis– This is all dependent on which Boller shows up to play Sunday night. By the way, Mason had an impressive helmet toss on Monday night.

22. Kevin Curtis vs. NY Giants– It’s essentially do or die for the Eagles. Donovan McNabb should play well against the Giants’ secondary. This, of course, is under the premise that the Eagles’ offensive line does not get trashed again by Giants’ defensive line.

23. Chris Henry vs. St. Louis– Henry should help the Bengals’ inconsistent passing game against the Rams.

24. Laveranues Coles vs. Cleveland– Kellen Clemens needs to put together some good performances to show that he is the quarterback of the future in New York. Coles’s production has suffered a bit due to injury and the quarterback problems.

25. Plaxico Burress at Philadelphia– Burress has struggled with an ankle injury for most of the season. If he can give the Giants something, he’ll be a problem for the Eagles’ secondary, which is still trying to figure out how to cover Wes Welker.

By Derek Jones
This entry was posted on Saturday, December 8th, 2007 at 10:46 pm and is filed under Cheat sheets, Derek Jones, FOOTBALL. You can follow any responses to this entry through the RSS 2.0 feed. You can skip to the end and leave a response. Pinging is currently not allowed.