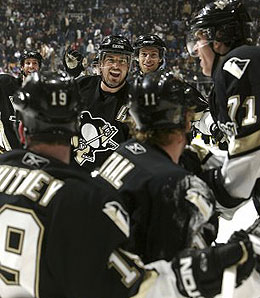 Will Mark Recchi, centre, be able to help the Atlanta Thrashers?

The Atlanta Thrashers, fighting to regain the form that made them Southeast Division Champions last season, have claimed Mark Recchi on waivers from the Pittsburgh Penguins Saturday.

Atlanta is currently in second place in the division at 14-13-1, but is playing much better of late, pulling within four points of the first-place Hurricanes with a game in hand.

The acquisition of yet another veteran in Recchi should help this club continue to push its way up the standings as the Thrashers hope to get back into a playoff position, currently sitting in 10th place in the East.

The former all-star right winger, now 39, has seen his ice time slide further this year as the Penguins continue their march of youth. After Pittsburgh assigned Recchi to Scranton/Wilkes-Barre of the AHL on Thursday, he was placed on re-entry waivers yesterday, allowing any team to grab him and only be on the hook for half of what’s left on his $1.75 million contract.

Atlanta says that Recchi will report to the club tomorrow.

The 5’10, 190-pounder ” the owner of 510 career goals ” will probably have his first practice with Atlanta on Tuesday.

Atlanta is not required to make a roster move to accommodate Recchi, but likely will within a few days.

It’s definitely debatable how much Recchi has left to offer, but the move has been greeted as a smart one by Thrasher fans. According to a poll on the Atlanta Journal-Constitution, over 65.6 per cent of respondents think the move will help Atlanta, against just 14.06 per cent who think he’s well past his prime.

Recchi has been getting dropped from all but the deepest of leagues. Wait and see where he lands (it’s possible he’ll see time on the second line in Atlanta) before decided whether he’s worth taking a chance on.

Still, we’re talking about a 19-year veteran with two Cup rings to his credit. That kind of character certainly can’t hurt Atlanta in its quest to return to the postseason.

By RotoRob
This entry was posted on Saturday, December 8th, 2007 at 8:09 pm and is filed under HOCKEY, RotoRob, Transactional analysis. You can follow any responses to this entry through the RSS 2.0 feed. You can skip to the end and leave a response. Pinging is currently not allowed.