The Free Agent Front, Part One 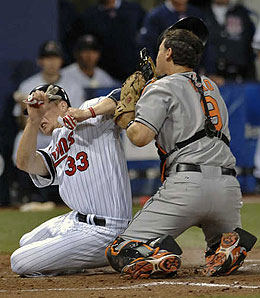 But today, let’s examine some of the remaining 119 free agents and where they might wind up. We’ll keep things simple with a team-by-team look. We’ll start off by looking at the first half of the American League.

Paul Bako: The Jays are said to have some interest this veteran back-up catcher, but they’re also thinking of re-signing Sal Fasano. Bako saw a fair amount of action for the O’s last year, and while he drew a few more walks last year, he still strikes out way too much to hit barely over the Mendoza Line.

Kris Benson: The Phils will watch him pitch in a couple of weeks to see if he’s recovered from his torn rotator cuff. Personally, I think they’ll do better letting his wife take the mound. Topless, of course.

Corey Patterson: Texas is interested, but Patterson wants a multi-year deal and the Rangers don’t want to go there. With the Braves losing Andruw Jones, they might have a look at Patterson, who didn’t have much value (other than steals) last year because of his limited runs and RBI on a crappy O’s team. Still, he’s done a very good job of making better contact in recent years, so hopefully that will translate into some higher averages soon.

Matt Clement: Toronto is trying to add Clement, who missed the entire 2007 campaign while recovering from an operation on his shoulder. Arizona is seeking starters, but is not expected to take a chance on the injury-prone Clement.

Eric Gagne: Now that Texas has ruled out bringing Gagne back, apparently, Milwaukee is about to pen the former Ranger closer, turned crappy set-up man for the Sox. Having lost Cordero and Linebrink to free agency already, the Brew Crew needs someone to close and Gagne is definitely capable. He’s certainly not unhittable as he was in his Dodger days, but judging by what he did in the first half, Gagne can still be quite effective as a closer.

Bobby Kielty: Boston is expected to re-sign Kielty to act as an extra outfielder, but until we find out what goes down with Jacoby Ellsbury and Coco Crisp, each the subject of trade rumours, Kielty will remain unsigned. The Mets are another possibility for Kielty, who barely saw any action for the A’s before he was DFAed in July. He played a bit more often for Boston, but he’s clearly lost his old Billy Beane-inspired on-base skills, so has no value in his role.

Doug Mirabelli: Boston may re-sign its back-up catcher, and given how few options are out there, the Sox may have little choice but to do so. He hits the occasional long ball, but other than his ability to been completely in synch with Tim Wakefield, Mirabelli brings nothing to the table. Besides, if Boston lets him go, we could have a repeat of 2006, when it had to give up a top relief prospect (Cla Meredith) in order to reverse the mistake of trying to let someone else handle the knuckleballer.

Darin Erstad: The Rays might need an extra outfielder, so that’s a possibility, although that doesn’t seem like the best match. San Diego is also in the market for an outfielder, assuming Mike Cameron doesn’t return and the club can’t land Kosuke Fukodome. If Erstad doesn’t find a suitable situation, he’s prepared to head back to school ” to help coach football at his alma mater, the University of Nebraska, where he was a star kicker (is that a non sequitur?). Erstad saw more action than I expected last year, and his numbers were up slightly, but he just seems so much older than his real age of 33, given the amount of serious injuries he’s endured over the years.

Chris Gomez: The utility man has apparently signed a one-year deal with the Pirates, but it’s not yet official until he takes his physical.

Kenny Lofton: If Toronto deals Alex Rios, a possibility that is being bandied about, it may be interested in penning the veteran Lofton. After coming over in a mid-season deal from Texas, Lofton wasn’t particularly productive for the Tribe. He has almost no extra-base pop anymore.

Trot Nixon: The Phils want another outfielder, but Nixon won’t be headed there. Nixon is just 33, but he seems to be washed up after a season in which he managed a mere 30 runs in 99 games. Even his once-solid strike zone judgment is slipping.

Sean Casey: Texas is said to be after Casey, especially if it can’t land Ben Broussard in a deal from Seattle. Casey still has decent gap power, but he is a horrible fantasy option, even with his solid batting average. He’s about as hollow a .300 hitter as you’ll find, and without the runs or RBI, he’s a waste of a roster spot.

Mike Sweeney: Apparently, Arizona is looking at Sweeney, but I’m really not sure why. The D-Backs realize he’d have to actually play some defense, right? This dude can’t stay healthy as a DH. He actually managed to stay in the lineup for half the year last season, and still can pump the ball into the gap on occasion, but his days as a high-average hitter are over, and his on-base skills have waned badly. Sweeney is 34 going on 44.

John Thomson: With the Jays chasing Paul Lo Duca, you can cross Toronto off the list of possible destinations for Thomson, as he’s made it clear he doesn’t want to pitch to Lo Duca (at least, that’s what he said last year). Let’s face it: no one is going to offer Thomson a major league deal regardless. He’s barely capable of holding down a Triple-A job these days, and wrist problems last year really screwed him out of a chance to show what he can or, more likely, can’t do.

Next up, we’ll take a look at the rest of the American League teams.

By RotoRob
Tags: Paul Bako
This entry was posted on Saturday, December 8th, 2007 at 6:28 pm and is filed under BASEBALL, RotoRob, Rumours. You can follow any responses to this entry through the RSS 2.0 feed. Both comments and pings are currently closed.