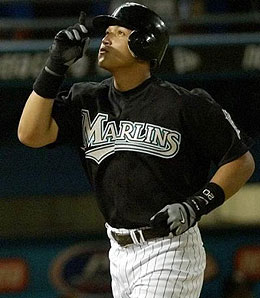 If you have a chance to grab new Tiger, Miguel Cabrera, you’ve got to grab him.

Who would you take in a 20-team roto keeper league with the following scoring categories:

I pick ninth and six have gone so far, so I am guaranteed one of these guys: Miguel Cabrera, Ryan Howard, Matt Holliday, Grady Sizemore, Ryan Braun or Jimmy Rollins.

I’m leaning towards Holliday, but can he repeat or do I go younger with Cabrera? I think I should stay away from Howard because of the Ks.

Thank you and keep up the good work.

With Cabrera going to the Tigers, I’ve got to go with him. He will now be on a team that is going to be elite in the AL and that should bring his game to a new level since he will have people to protect him in the lineup. I think you would be fine with Holliday, but a power-hitting 3B that should get even better takes precedence over a power-hitting OF that had some pretty big differences in his home and away stats. He still hit away, but nothing close to his home stats.

Howard is going to win you the K category all by himself, so I would stay away from him. I’m not a big Sizemore or Rollins fan to be honest. As for Braun, let’s see him do it again and then I will be on the bandwagon. Remember Rodrigo Lopez? Anyone can look great for one season. Not to say he is a one-year wonder, but I am not ever taking a second-year player in Round One.

By James Morris
This entry was posted on Friday, December 7th, 2007 at 3:22 pm and is filed under BASEBALL, Dear RotoRob, James Morris. You can follow any responses to this entry through the RSS 2.0 feed. You can leave a response, or trackback from your own site.