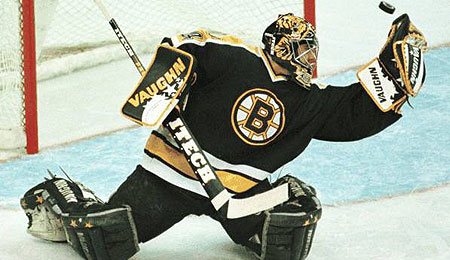 As sad as it sounds, Boston probably hasn’t had a good goalie since Byron Dafoe was saving pucks almost a decade ago.

The Bruins really haven’t had a solid goalie since Englishman Byron Dafoe in 1998-99. Since then, the team has basically treated goalies like an afterthought, more of a cherry on the cake than something essential.

You know, because what does the goalie do really? All they do is stop the other team from scoring.

So apparently someone in Boston noticed the phenomenon and this year the Bruins really made an effort to solidify their goaltending, going with Tim Thomas, who had flashes of success over the previous two seasons, and trading for Minnesota goalie Manny Fernandez during the offseason. So while the Bruins didn’t have a one-two knockout punch in net, they didn’t have to cringe every time someone crossed their blue line.

So far it hasn’t really worked out for Boston. Fernandez made just four starts, putting up a .832 save percentage and 3.93 goals against before being placed on injured reserve this week.

Thomas fared better, taking the bulk of the work and putting up a 2.77 goals against and .917 save percentage. That is, until he was injured Wednesday night against the Devils. Was it serious? Let’s just say the Bruins traded for Alex Auld, fast becoming hockey’s answer to McDonald’s (there’s one in every city), from Phoenix. Auld’s numbers, an .880 save percentage and 3.54 goals against, are positively Fernandez-esque, but rock-solid goaltending is rarely available at the last minute. But it all points to Thomas spending some time on the shelf, and Auld seeing some more work. Will Auld thrive under the pressure?

Consistency has never been his strong suit, but in between implosions, he’s often managed to put up decent numbers. He could be an interesting high-risk fantasy pick.

Going to the flip side, how hot is Devils goalie Martin Brodeur? His team is currently riding an eight-game winning streak. During the streak, he’s put up two shutouts and a .943 save percentage. I doubt anyone would ever dump a goalie of Brodeur’s calibre from a fantasy roster, even as he struggled through the start of the season, but if he somehow hasn’t been scooped up, he looks like he’s only getting stronger.

Compare that kind of heat and momentum to the Ottawa Senators, who lost seven in a row before finally managing to topple the might Florida Panthers Wednesday night.

From a fantasy perspective, you have to love that the Senators have three big guns: Jason Spezza, Dany Heatley, and Daniel Alfredsson. From a win-loss perspective, you kind of wish they had a little more of an attack amongst the other nine forwards. Having a porous Martin Gerber in net for four losses in a row sure didn’t help, nor did the on-the-job recuperation of once-and-future starter Ray Emery. Ottawa is rumoured to be shopping for a top six forward, but will one person really make that big a difference?

Speaking of a big difference, how can you tell if a player is truly an impact player? How about if he’s over 95 per cent owned among fantasy teams despite possibly being about to retire. Scott Niedermayer told the Ducks he’s coming back and thousands of fantasy owners who have been using a precious roster spot on him are hoping he returns just as effective as he was before he left.

By Steven Ovadia
This entry was posted on Friday, December 7th, 2007 at 3:57 pm and is filed under HOCKEY, Ice Chips, Steven Ovadia. You can follow any responses to this entry through the RSS 2.0 feed. You can leave a response, or trackback from your own site.