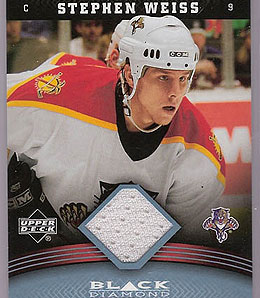 Stephen Weiss is getting the helpers, but can’t score to save his life this season.

After winning four straight games to get back to .500 and pull within four points of the division lead, the Florida Panthers have dropped their past two games to slide back to eight points behind the first-place Hurricanes.

Losing to Boston, as they did on Thursday, was a surprise, given the club’s recent domination of the Bruins. In the six previous games against Boston, Florida had outscored the Beantowners 33-17. For the Bruins, it was the first time they had beaten the Panthers since 2005.

But so it goes for this inconsistent club that had worked so hard to get back to even. Now, Florida finds itself two points behind the Islanders for the eighth and final playoff spot in the East. And the Isles have two games in hand. Clearly, the Panthers have plenty of work to do if they hope to get back to the playoffs for the first time since the 1999-2000 season.

At least they get the struggling Senators on Wednesday, so perhaps that will get the Cats back on the winning track.

Stephen Weiss is racking up the assists, but after breaking through with 20 goals last year, he has just three this season, putting him on pace to finish with single digits for the year, a major disappointment for the fourth overall pick in 2001. Of course, the word on the street is you actually have to shoot if you want to score. Weiss has all of 36 shots in 26 games after firing 176 last season. Shoot the puck, dude.

Worse yet, he failed to register a point in either of the two losses.

After a slow start in his first year in Florida, goalie Tomas Vokoun is picking things up lately. In his last four games, he’s given up just seven goals and has recorded a .951 save percentage. For the year, he’s lowered his GAA to 2.72 with a .916 save percentage. The workhorse is on pace to play 70 games for the second time in his career, and he’s headed for 36 wins, which would tie his personal best.

Unfortunately for Vokoun, the team is not scoring enough to support him. While the power play has been excellent and the penalty killing solid, the team ranks 24th with just 2.44 goals per game. It’s not for lack of trying, however. Florida is taking 29.4 shots per game ” 10th most in the league. The Panthers simply can’t translate those shots into goals. Time for some target practice, people.

By RotoRob
This entry was posted on Tuesday, December 4th, 2007 at 1:13 am and is filed under HOCKEY, RotoRob, Team report. You can follow any responses to this entry through the RSS 2.0 feed. You can leave a response, or trackback from your own site.