The Wire Troll: Are you Hip to the Skip? 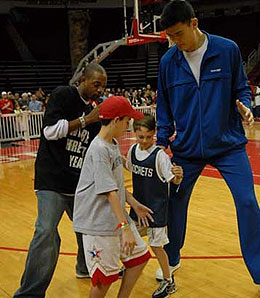 Rafer Alston, left, seen here playing with some other children and Yao Ming, is on one of his patented hot streaks.

Another week in the NBA has come and gone and it’s more of the same: Injuries are always taking your players out of the lineup and nobody knows what to do. I get all kinds of e-mails about trade offers and what owners should do. Here is a simple list of things that I think about when trading:

Alright, now on to some recommendations for the week.

Rafer Alston: Skip To My Lou is someone I have had and cut and am now picking back up. He is a player that you need to keep a close eye on because he will go through hot and cold spells. Right now he is hot, so take advantage of it. But, cut him loose when he cools down. I’d grab him in 10-team leagues or higher, but buyer beware of his cold streaks! Right now, Alston is coach Rick Adelman’s man, but also note that Steve Francis is starting to gain some traction there, so this situation is far from resolved for the long term.

Antoine Walker: The man who has never seen a shot he didn’t like has been another hot one over the past week. ‘Toine is shooting 45.7 per cent from the floor and averaging 1.8 3PTM, 12.5 points, 4.0 assists, and 1.3 steals per game over the past week. He’s never been a very good free-throw shooter, but I guess when he was robbed last summer, the thief also took whatever accuracy he had left too, because Walker’s current free-throw shooting is a dismal 33.3 per cent. But I can live with that at the utility spot if he can keep the other numbers up. Owners in 12-team leagues should give him a look.

Marko Jaric: Jaric missed Friday’s game with a sprained foot (and is doubtful for tonight), but before that he was averaging 14.3 PPG, 3.3 RPG, 5.8 APG, and 1.3 SPG over the past week. If Jaric can heal from the sprained foot, he should have some solid fantasy value from the waiver wire. I don’t want him unless I am in a 12-team or larger league.

By James Morris
Tags: Rafer Alston
This entry was posted on Saturday, December 1st, 2007 at 4:53 pm and is filed under BASKETBALL, James Morris, The Wire Troll. You can follow any responses to this entry through the RSS 2.0 feed. Both comments and pings are currently closed.