Brocail Back for Third Tour of Duty With ‘Stros 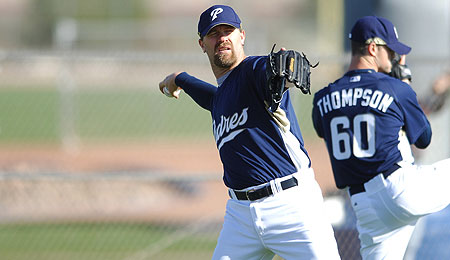 Coming off a big season with the Padres, reliever Doug Brocail will try to settle down a young Houston bullpen.

The Astros added some much-needed veteran leadership in the bullpen Tuesday, penning reliever Doug Brocail to a one-year, $2.5 million deal.

This will be the 40-year-old righty’s third tour of duty with Houston, having also spent 1995-1996 with the Astros and then again in 2001-02 (however, back-to-back Tommy John surgeries cost Brocail both of those seasons).

Lest you think his ERA was Petco-padded, think again. Brocail’s ERA at home was 4.88, but 1.79 on the road, which included 3 2/3 perfect frames in Houston.

The Astros could definitely use the help. After enjoying one of the NL’s better pens in 2006, Houston’s relief corps collapsed last year, with just two teams having worse collective ERAs than the Astros’ pen.

It’s a very young pen, especially when prior to 2007, former GM Tim Purpura, honouring former manager Phil Garner’s desire to bring in a reliever that could pitch multiple innings, parted with Russ Springer. Many considered Springer a steadying influence in the Houston pen.

While Brocail could help steady the young Houston bullpen, asking him to duplicate his 2007 numbers may be a bit much. He was deadly against southpaws last year (.182 BAA), but in looking at his recent history, there’s no way that’s going to happen again. Let’s also not forget about how unforgiving Minute Maid Park is with the long ball, and with Brocail’s extreme groundball tendencies shifting to a more neutral GB/FB ratio in recent years, expect him to give up plenty of dingers. If he records another sub-4.00 season in 2008, count me among the surprised.

The bottom line is we shouldn’t expect to see Brocail reprise whatever fantasy value he had in deeper NL-only leagues last year.

By RotoRob
This entry was posted on Tuesday, November 27th, 2007 at 11:40 pm and is filed under BASEBALL, RotoRob, Transactional analysis. You can follow any responses to this entry through the RSS 2.0 feed. You can skip to the end and leave a response. Pinging is currently not allowed.