The Wire Troll: Agent Zero is Putting up Zeros 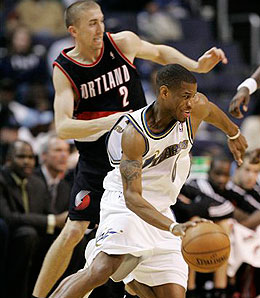 Antonio Daniels is an excellent option now that Gilbert Arenas is out. (AP Photo/Haraz N. Ghanbari)

Well, Gilbert Arenas is now out and owners like me that took him with our first overall pick are heartbroken. How do you find a replacement for the first guy you took to anchor your team? You don’t, to be perfectly honest. Nobody I will recommend here will give you the production that Arenas would have, but I will give you the best option that I see instead.

Antonio Daniels: Here is Arenas’s replacement for the Wizards and for you. Antawn Jamison is the man in D.C., but someone else has to step up, so it is either going to be Daniels or Andray Blatche. Personally, I took both, but only Daniels in my 10- or 12-team leagues. Daniels is a bit slow to guard quicker point guards and his 3-point shooting has been weak this year, but if he’s getting the minutes, he’s capable of helping you in everything except blocks.

Andray Blatche: If you look at the past week, Blatche has been putting up some pretty darn good numbers. When a waiver wire Forward/Centre gets you 15.3 points, 8.3 rebounds, 2.8 assists, 3.0 blocks, and only 1.3 turnovers per game, that’s a hidden gem right there! Blatche needs to be owned in all formats, be beware that he tends to get into foul trouble. Still, he’s been seeing significant minutes and has been quite productive.

Jamaal Tinsley: Now, it’s not that he is going to be available in all leagues, but he did get cut in about half my leagues. If you look at his past week’s stats, he is starting to turn it up again with 15 points and 10.5 assists per game. If you need PG help and Tinsley is available, I’d go ahead and take him for the assists alone, but the 21 PPG in his past two games is sure sweet, too.

Troy Murphy: If you are a Jermaine O’Neal owner, you should know that he is asking Arenas for advice on knee problems. The upshot here is that Murphy had better be on your roster! He is a must-have for J.O. owners and is a top FA pickup for non-owners as well. I don’t see O’Neal being healthy this season and I think he will miss time on a regular basis with knee surgery to either come this season or in the offseason. As for Murphy, not only will he provide you with points and boards, but how about outside game? The dude is canning 1.8 treys per game — double his previous career best.

By James Morris
This entry was posted on Saturday, November 24th, 2007 at 6:43 pm and is filed under BASKETBALL, James Morris, The Wire Troll. You can follow any responses to this entry through the RSS 2.0 feed. You can leave a response, or trackback from your own site.