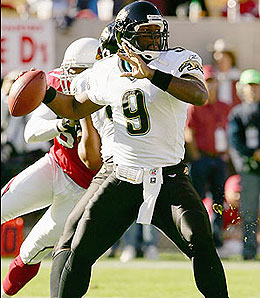 Andy’s latest man crush is on Jacksonville’s David Garrard, who is approaching double digits in TDs, but has yet to be picked off.

1. Tom Brady vs./@ ______ – Well, that didn’t exactly go as planned against the Eagles. If he struggles again, you could make the case that teams have a blueprint for the Patriots. For now, I’m not willing to drop Brady off of his top perch.

2. Ben Roethlisberger vs. Bengals – Earlier in the year against the Bengals, Roethlisberger tossed two scores against Cincy. Now that the Bengals’ offense seems to be back on track, the Steelers’ will be forced to keep up. That could lead to three or four touchdown tosses. Unless it’s rainy. Then all bets are off.

3. Kurt Warner vs. Browns – Despite the late fumble, it was exceedingly entertaining to see the Cardinals’ offense return to its air-it-out ways. And now they get to take on a pass defense that has allowed more touchdowns than any other team in the league. Oh, and the Browns’ offense is playing so well, Warner will have to throw deep into the game. This sounds like a fantasy football gift.

4. Peyton Manning vs. Jaguars – Earlier in the season, Manning struggled against the Jaguars, only tossing one touchdown. But keep an eye on Anthony Gonzalez. He had a good week last week and seems to have developed a rapport with Manning. I’m the first to call the original Golden Boy overrated, but Manning often has a killer second game against the Jags.

6. Tony Romo vs. Packers – So, Romo’s idol is Brett Favre, who is his opponent in this game. Of course, Romo and Favre will be on the field together for exactly zero plays. I still bet there’s an NFL Network story about Romo and Favre in their pre-game show. I’ll put money on this.

7. Drew Brees vs. Bucs – Brees has multiple touchdowns in every game but one since Week Six. That’s pretty good, and it’s a trend I’m not willing to bet against. Yeah, the Bucs are a tough defense, but Brees and Marques Colston have the hot hand. They’ll keep it going.

8. Carson Palmer @ Steelers – It’s funny how people will turn on a guy. I know this is supposed to be about Palmer, but I have to talk about Chad Johnson. When the Bengals were doing well, the analysts for the major networks got a kick out of Johnson’s antics. Sure, they acknowledged the lack of sportsmanship and whatnot, but at the end of the day, they all said those things with a goofy smile. Now that the Bengals are losing thanks to a porous defense and a non-existent running game, Johnson’s celebrations are somehow a root cause of why the team is losing. Please. I should be on CBS just to set some people straight.

9. Brett Favre @ Cowboys – Hip hop song. Scene from Something About Mary. Picture of Romo when he was 12. Favre talking about Romo. Romo talking about Favre. Teammates talking about both. Ta-Da! NFL Network will use this as a script.

10. David Garrard @ Colts – I officially have a new football crush. Garrard is up to nine scores and no interceptions. Okay, that won’t win a ton of fantasy football games, but he’s not losing them for you either. Not bad for a guy you picked up off the waiver wire.

11. Matt Schaub @ Titans – Since Andre Johnson returned to the lineup, Schaub has four scores and over 550 yards. Needless to say, there’s something of a correlation there. As long as Johnson is in the lineup, Schaub is a legitimate fantasy quarterback.

12. Matt Hasselbeck @ Eagles – If the Eagles’ defense can hold Brady to just one score, then what could they do to Hasselbeck? And now that the news that D.J. Hackett is out of the game has come out, I’m dropping Hasselbeck out of my startable category unless you play in a larger league or are really screwed. But hey, at least you don’t have Eli Manning, right?

13. Philip Rivers @ Chiefs – I am pretty much at a loss to explain the Chargers. Their offense seems to turn the corner every now and then, only to turn in a stinker at some point. If you’re starting Rivers with any consistency, you’re probably nowhere near playoff contention. But hey, at least you don’t have Eli Manning!

14. Jeff Garcia @ Saints – Maybe Garcia should be higher on this list. I really don’t know anymore. It’s Garcia! He was good four years ago! This really can’t be happening. And Joey Galloway!? He was good 10 years ago! The Bucs aren’t real. It’s the only explanation.

15. Jason Campbell vs. Bills – Rumor has it at one point Campbell was dating this woman. Interesting. But hey, at least he didn’t date…umm…Eli Manning?

By Andy Goldstein
Tags: Quarterback Rankings
This entry was posted on Thursday, November 29th, 2007 at 3:47 pm and is filed under Andy Goldstein, Cheat sheets, FOOTBALL. You can follow any responses to this entry through the RSS 2.0 feed. Both comments and pings are currently closed.