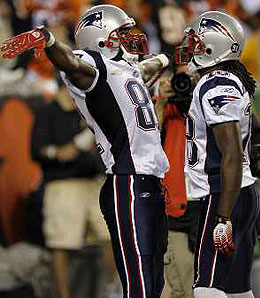 1. Randy Moss vs. Anyone – I agree with Andy. It no longer matters who Tom Brady plays. This week the unfortunate opponent will be the Buffalo Bills, who will be without Marshawn Lynch. I hope the Bills have a game plan to score 65 points. Here’s hoping that Moss catches three touchdown passes and offers a salute to one of the most overrated teams in NFL history, the ’72 Dolphins. Hey Shula, nice schedule!

3. Reggie Wayne vs. Kansas City – He managed just five catches for 36 yards and a score in the playoff game against Chiefs last season, but he’s the go-to guy now though with Marvelous Marvin out. Wayne should have another solid day.

4. T.J. Houshmandzadeh vs. Arizona – His touchdown streak stopped, but he should be able to revive it against the Cards.

5. Braylon Edwards at Baltimore – Be jealous Baltimore, be very jealous. Edwards may not have a huge week, but he’ll get into the endzone.

6. Larry Fitzgerald at Cincinnati – The Cardinals are one of the strangest teams I’ve ever seen. Somehow, they are still in the thick of the NFC West race and Fitzgerald’s play lately is one of the reasons. Defense is not chic in Cincinnati, so expect Fitz to have another big day.

7. Hines Ward at NY Jets – Big Ben is closing on the Steelers’ single-season touchdown pass mark. Look for him to exploit an average Jets’ secondary and connect with Ward in the process.

8. Torry Holt at San Francisco – He’s alive! Okay, maybe he’s not enjoying one of his finest seasons. Yet, the Rams’ offense is healthy again (minus Orlando Pace, of course).

10. Wes Welker at Buffalo – My older brother has a motto for the dating scene. “Just lie”, he says. Well, if the Patriots and my brother did it, I’m guessing it’s true.

11. Roy Williams vs. NY Giants – His performance boils down to whether the Lions can protect Jon Kitna from the Giants’ lethal pass rush. Not sure if you’ve noticed, but Kitna is not Fred Astaire in the pocket.

12. Santonio Holmes at NY Jets – Holmes is in the midst of his best year in the NFL. He’ll continue it against the Jets with a score.

13. Joey Galloway at Atlanta – We know the drill. He’ll either catch five balls for 130 yards and a touchdown or have two catches for 27 yards. Thanks for the balance, Joey!

14. Plaxico Burress at Detroit – Monitor his injury progress. He is still complaining about a bum ankle.

15. Patrick Crayton vs. Washington – Crayton has been a steady option for Dallas this season and may have success against Washington’s banged up secondary.

16. Chad Johnson vs. Arizona – He’s the league’s best number two receiver…wait a minute. I was just handed a note that says he’s supposed to be a number one. Oops, could have fooled me.

17. Donald Driver vs. Carolina – Even though the resurgence of Brett Favre continues, Driver has not benefited greatly. He only has two touchdown catches. I’m not sure if he’ll turn this around.

18. Kevin Curtis vs. Miami – If he doesn’t fall asleep from boredom in this one, he should be in for a pretty solid performance.

19. Anquan Boldin at Cincinnati – It’s been a disappointing season for the ‘Quan with the hip injury playing a big role. The Bengals’ weak D could be the remedy Boldin is seeking.

20. Dwayne Bowe at Indy – Too bad the Chiefs are saddled with Brodie Croyle at quarterback. The passing game will get a reprieve with Dwight Freeney out, so, Bowe might have more success than originally expected.

The best of the rest…

By Derek Jones
Tags: Wide Receiver Rankings
This entry was posted on Saturday, November 17th, 2007 at 5:24 pm and is filed under Cheat sheets, Derek Jones, FOOTBALL. You can follow any responses to this entry through the RSS 2.0 feed. Both comments and pings are currently closed.