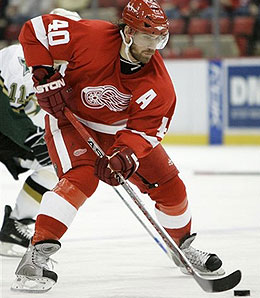 Henrik Zetterberg has come back down to earth — as in, he went an entire game without getting a point. The new current points streak leader is one Sidney Crosby with 18 games. More importantly, the Pens gave Marc-Andre Fleury his first win since the ice age with a 3-2 win over the Islanders. Does that mean that Fleury will be getting the bulk of starts again? With goaltenders, a little confidence goes a long way.

Things are only getting better in Ottawa with Jason Spezza’s return. That could only mean better things for his linemates, who are already having a pretty good go of things.

Staying in Ottawa, Wade Redden claims to not be bothered by the rumours about his upcoming free agency and the tight cap space the Senators are in. His performance since the beginning of November, though, isn’t that good — just two assists despite a 5-1 Ottawa record. Is that impetus to move Redden for some other assets?

Erik Cole’s had yet another scary neck injury, though this time it’s more of a short-term issue. Cole will be on the shelf for at least a week, giving Eric Staal one less weapon to pass to. Fortunately, other than dropping a stinker to Tampa Bay, the Canes are still flying high, led by ageless-wonder Rod Brind’amour.

In Nashville, the Predators have finally gotten a bit of good news — Shea Weber’s about to return. Coach Barry Trotz says that the earliest Weber can return to the Preds’ lineup is Saturday against St. Louis.

Fantasy owners rejoice: for those of you that used a high draft pick on Patrick Marleau, it looks like the Sharks’ captain is finally waking up. He’s got six points in his past three games playing with an assortment of wingers. His pal Jonathan “Remember When I Won The Richard Trophy?” Cheechoo isn’t so lucky.

More bad news for the Edmonton Oilers. Sheldon Souray was supposed to return this week after recovering from a separated shoulder, but Souray’s recovery hasn’t gone quite as well as he’d hoped, and he is now out indefinitely.

More injury returns: Todd Bertuzzi’s skating off his injury of irony (concussion). He’s only taking non-contact drills, which means no one can punch him in the back of the head.

By the way, did you hear Brett Hull is now co-GM of the Stars? We don’t know if Hull will transform “The Team That Can’t Score” into “The Team That Floats On Defense But Can One-Time Really Well.”

And no fantasy column would be complete without mentioning Vincent Lecavalier’s recent rise to the top of the scoring race. A five-point game will do wonders for you, and Marty St. Louis’s feeling pretty good as well. Brad Richards isn’t doing too bad at a point-per-game, though he’s an ugly -9 on a team that’s mostly on the positive side. For fantasy purposes, Vaclav Prospal (the third wheel on the Lecavalier/St. Louis express) is doing better than Richards and his $7 million salary.

By Mike Chen
This entry was posted on Friday, November 16th, 2007 at 7:03 pm and is filed under HOCKEY, Ice Chips, Mike Chen. You can follow any responses to this entry through the RSS 2.0 feed. You can skip to the end and leave a response. Pinging is currently not allowed.